Standout import guard and his teammates have Lakehead on the verge of the national top 10 for the first time since the Scott Morrison era came to a close.
Nov 6, 2019 10:43 AM By: Leith Dunick 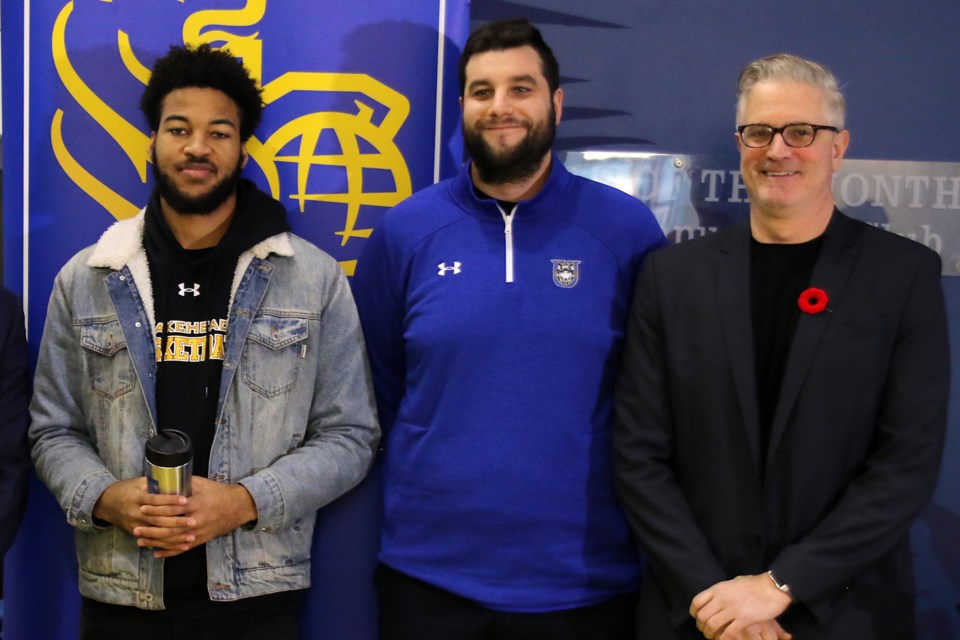 THUNDER BAY – Before committing to the Lakehead Thunderwolves last season, Isaiah Traylor was a bit of a journeyman, a rarity at the university basketball level.

A star in high school in Tupelo, Miss., a city that claims Elvis Presley as its own, Traylor played two seasons at East Central Community College in Decatur, Miss.

He signed with Arkansas State, but quickly changed course and decided Stephen F. Austin was a better fit. When that didn’t work out as planned, he transferred to North Alabama, only to see coach Bobby Champagne shown the door.

It was then he looked north of the border, following UNA teammate Kevin Ndahiro, a Canadian, to Lakehead University.

After a slow start to his inaugural season in Thunder Bay – he was even relegated to bench duty for an eight-game stretch – Traylor found his form over the final nine games of the regular season, leading the Thunderwolves to seven wins as they surprised the OUA world, rebounding from a 2-10 start to make the playoffs for the first time since 2016-17.

In his second season, he’s got the Wolves on the verge of the national top 10.

Traylor, named the men’s basketball player of the month for October, has scored 20 or more points in three of four games this season, leading Lakehead to a stunning sweep last weekend – on the road, nonetheless – against the always tough Ryerson Rams.

The scary thing is, the 23-year-old says there’s still plenty of room for improvement.

“I’m still figuring a lot of things out,” said Traylor, who stands eighth in both scoring and rebounds in the OUA after four games.

Coach Ryan Thomson says Traylor has done a great job making the right read with the ball, something he struggled with a bit in his first season at Lakehead.

“I think really just the year of learning how to trust his teammates and realize that we’re all in it together, has really helped his game,” Thomson said.

Traylor said the basketball side of things come easy. It’s the intangibles where he’s trying to make his biggest strides in 2019-20.

“Some days it’s going to go, some days it’s not. Being a leader, being the same guy when you lose as when you win, bad days or good days, is one thing I’m working on,” Traylor said. “I think I’ve gotten better at that, so far.”

It helps he’s got plenty of talent around him too.

Last season, at times, it felt like Traylor had to try to take the team on his back, which sometimes led to bad decision-making with the ball, likely feeling he had to do it all.

This season, with the addition of guards Laoui Msambya, Chume Nwigwe and Jamani Barrett – who have combined for about 30 points a night on average – forward Eric Gonzalez, and the stepped up play of returnees Lock Lam and Alston Harris, Traylor is free to do his thing, knowing his teammates will be there to pick him up if the shots don’t fall.

It’s early, but it’s not hard to like what he sees, even cautiously.

“It’s only four games in, so you really don’t know who you are. We're just trying to create an identity for ourselves, keep going hard and not give up on anything. We're rolling with the punches."

Traylor and the Thunderwolves host Waterloo on Friday night and Laurier on Saturday. Tip-off is 8 p.m. at the C.J. Sanders Fieldhouse.

Thunderwolves sign NCAA product Nate Hooper
Sep 24, 2020 6:58 AM
Comments
We welcome your feedback and encourage you to share your thoughts. We ask that you be respectful of others and their points of view, refrain from personal attacks and stay on topic. To learn about our commenting policies and how we moderate, please read our Community Guidelines.