This week’s Monday Morning MUGing takes a look at Heartbeat Hot Sauce.
0
May 14, 2018 9:14 AM By: Ayano Hodouchi-Dempsey 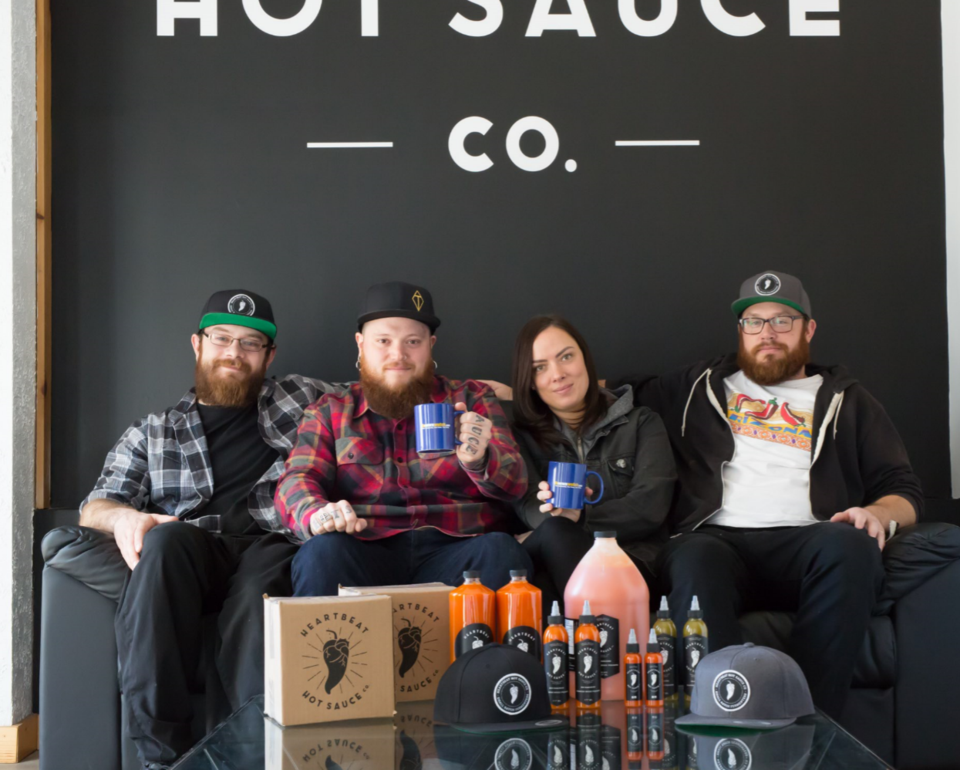 THUNDER BAY -- One of the hottest products to come out of Thunder Bay in recent years is a slim bottle of sauce by Heartbeat Hot Sauce.

Co-owners Al Bourbouhakis and Nancy Shaw started making hot sauce with their friends at Tomlin where they both worked, experimenting with a batch of locally grown hot peppers from Chris Paulusma, the local hot pepper farmer. That was in October 2015, and by the next summer, they started taking the hot sauce seriously as a business since it proved so popular with friends and colleagues. George’s Market was the first to sell a bottle of the now-ubiquitous Red Habanero in October 2016, and the bright orange bottles began showing up at almost every local store in the city.

As demand grew, the hot sauce team moved out of Tomlin’s kitchen where they had been cooking up the sauce once a week and into their own facility on May street. Bourbouhakis, who was a sous chef at Tomlin’s, left the restaurant to pursue hot sauce full time, while Shaw, co-owner of Tomlin, still divides her time between the two.

Getting local restaurants and retailers to carry Heartbeat Hot Sauce came about organically, Bourbouhakis explains. “We’re pretty well-connected in the restaurant community and we work together a lot.” One major collaborator is El Tres, which opened its doors just over a year ago. Heartbeat Hot Sauce worked with the chefs at El Tres to develop two sauces that would be their signature flavours. El Tres Green and El Tres Red were instantly popular, and they eventually released the green to retailers, but kept the red exclusive to El Tres. “That one was really developed around their menu style, so it’s appropriate that it stays there.”

Currently, the peppers come from California, Arizona and Mexico, but they still make sure to include some local peppers. They recently announced that they are partnering with DeBruin’s Greenhouse to source all their peppers, onions and cilantro locally. The peppers are currently growing in DeBruin’s greenhouse hydroponically and in a few months will make their way into the sauces.

Red Habanero tastes as bright as its orange colour, and has a moderate but pronounced amount of tingling heat. El Tres Green is tangy and sweet; not as hot as Red Habanero but just as addictive.

When asked what their favourite food pairing for Red Habanero was, Bourbouhakis and Shaw looked at each other and said, “Peanut butter.”

“Specifically, peanut butter and iceberg lettuce sandwich. On toasted bread. With the hot sauce,” she explained. Bourbouhakis tried to help. “If you think of peanut and spice, it immediately becomes normal. Like spicy Thai peanut. It’s not a sweet peanut butter sandwich. Just try it!”

Monday Morning ‘MUG’ing: A green and cost-effective cleanup
Jan 6, 2020 9:10 AM
Comments
We welcome your feedback and encourage you to share your thoughts on this story. We ask that you be respectful of others and their points of view, refrain from personal attacks and stay on topic. To learn about our commenting policies and how we moderate, please read our Community Guidelines.