This week’s Monday Morning ‘MUG’ing is about Hooligan Fuel Hot Sauce, arguably the hottest new business born during the pandemic.
Apr 12, 2021 11:20 AM By: Ayano Hodouchi-Dempsey 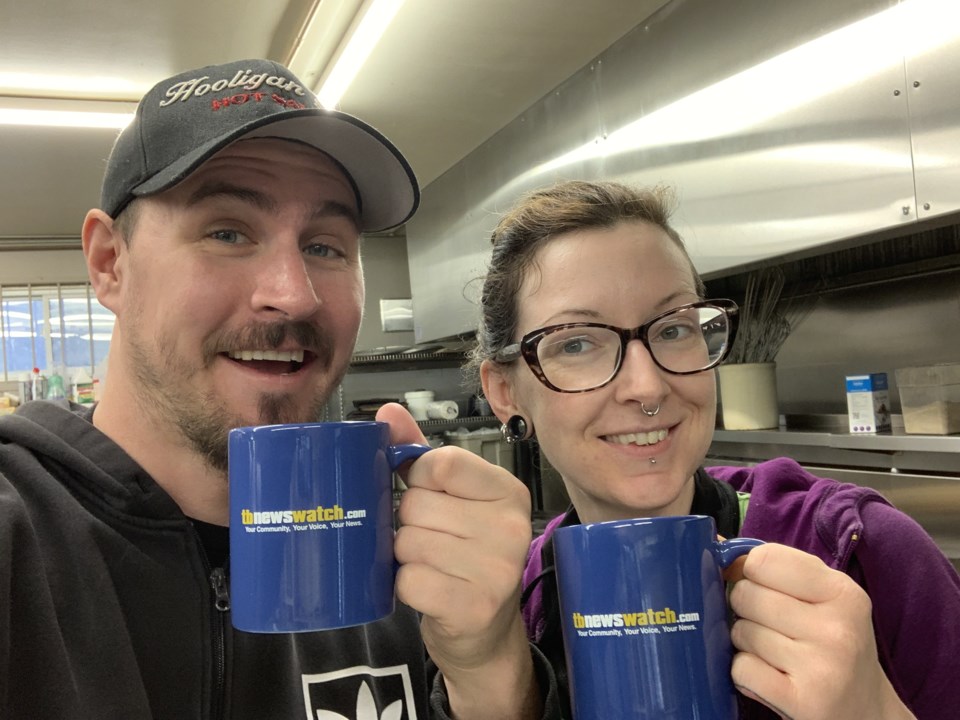 THUNDER BAY -- Before the pandemic, Kevin Cernjul and Kimberly McKenzie spent little time together in the kitchen. “He worked nights, and I worked at a restaurant, so we never ate together,” McKenzie says.

Then one day in March 2020, both of them found themselves unemployed and at home all the time. With little to do, the two started cooking.

“One thing led to another, we had all this extra [hot] sauce, so we brought it to friends, dropped it off. All these reviews started coming in, and ‘Can I get more of it?’ I thought, maybe there’s a business here,” Cernjul recalls.

The two started bottling and selling it as Hooligan Fuel Hot Sauce in late August last year. The first flavour, Creeping Heat, was adapted from recipes from Cernjul’s Croatian family. McKenzie is behind the Limey Bastard and Life’s a Peach sauces.

“I’m a huge fan of pineapple on pizza, but because pineapple is so sweet, I really like having a citrusy spiciness to go with it. I used to drizzle random hot sauce and lime juice on my Hawaiian pizza. So I wondered if I could make something that was a combination of the two,” she says about Limey Bastard.

“It’s not just a peach habanero,” Cernjul explains. “Peach, mango, hints of vanilla underneath. It’s really different. You’re not just getting one flavour, we’re trying to get your taste buds more excited.”

McKenzie’s favourite is Busk a Nut (named with a nod to Buskers Festival), developed for a friend of Cernjul’s who has a severe peanut allergy. The peanut-free sauce is based on chickpeas and sesame seeds.

Those four and Birthday Biatch, another fruity one, make up the five regular flavours. Crandemic, launched in November 2020, is a limited-edition cranberry flavour.

“It just took off and hasn’t slowed down,” Cernjul says. "Ever since Christmas, we haven’t had a day when somebody didn’t ask if it’s still available. So we brought it back temporarily.”

The sauces are sold online, and in 20 retailers. They have shipped bottles to cities all across North America. “If somebody had told us last year that I would have a hot sauce that’s popular in Fort Worth, Texas, I wouldn’t have believed them. None of that makes sense to my mind a year ago,” Cernjul says. The two have been sacrificing sleep to keep up with the growing demand.

Hooligan Fuel Hot Sauce is a full-time job for them now. “I never thought I’d like to spend this much time in a kitchen,” Cernjul admits. “But I’ve enjoyed it, spending time together in the kitchen, and being able to do this. And if I can keep doing it as a career, going to work every day with Kim, I wouldn’t turn it down for anything.”