Monday Morning ‘MUG’ing: A life on the farm

This week’s Monday Morning ‘MUG’ing is about Haywire Farm, a small family-run farm.
Sep 28, 2020 8:16 AM By: Ayano Hodouchi-Dempsey 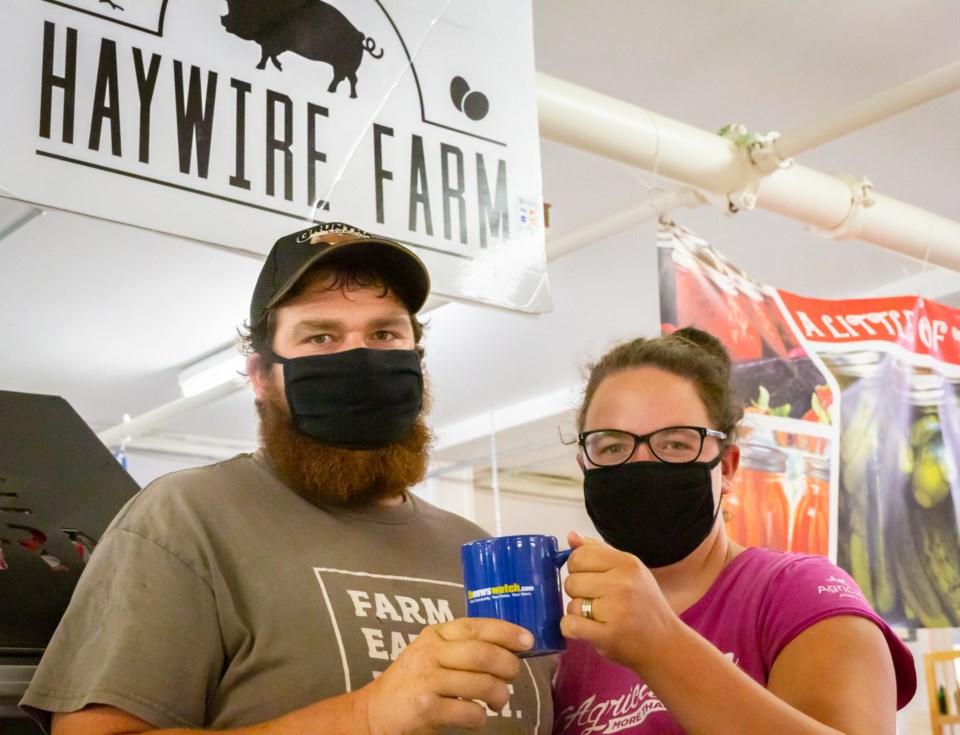 THUNDER BAY -- Ericka and Zachary Reszitnyk started Haywire Farm in Gillies Township in 2007. “We found a piece of property with a house and a barn and 150 acres and he [Zachary] said, ‘let’s go for it,’ and I said sure,” Ericka says.

Zachary grew up on a strawberry farm, then worked at Fort William Historical Park as a farmer. It had always been his dream to have a farm of his own, and Ericka embraced it and made it her life as well.

The couple started small, with four sheep, 50 laying chickens and 100 meat chickens the first year. “Then we started raising pigs, and we decided to start breeding our own,” Ericka adds.

Haywire Farm has been at the Thunder Bay Country Market since 2017, and started offering a meat CSA (Community Supported Agriculture) box last year. This year, they doubled their number of subscribers and have 35 families signed up for the 20-week program. Every three weeks, subscribers pick up a box of frozen meat including pork, chicken and some eggs. Next year, they hope to ramp up their numbers even more.

“CSAs help us plan how much to raise,” explains Zachary. “Even now we’re already planning, trying to figure it out. Pigs take six to eight months to raise. We have to plan a year ahead. Cows take two years. Chickens take eight to 10 weeks.”

The cows and pigs are processed at the abattoir in Murillo, while the chickens are taken to Dryden. They are then packaged and frozen, and the Reszitnyks are involved throughout the process.

The couple also started a market garden this year, preparing the land the old-school way with animals. Cows grazed on the land last year, then the pigs came in, rooting around all winter. They planted corn, cucumbers and beans, selling vegetables through their social media accounts on Facebook and Instagram, and Superior Seasons’ website.

Due to the surge of interest in gardening this year, they had trouble sourcing local seeds and eventually had to order from West Coast Seeds in B.C., but they had a very good season, they say. Their vegetable season is over for this year, but they plan to do it again next year.

The decision to start a small family farm was the right one, Ericka says. “I jumped in and I loved it. We’re raising our three kids out there on the farm. Our kids love the tractor work, the field work. They help us with the chickens and the cows.”

“It’s a lot of hard work, but I know where my food is coming from,” she says. “I wouldn’t want to do it any other way.”

Making shopping local easier for the customer
Oct 13, 2020 7:54 AM
Comments
We welcome your feedback and encourage you to share your thoughts. We ask that you be respectful of others and their points of view, refrain from personal attacks and stay on topic. To learn about our commenting policies and how we moderate, please read our Community Guidelines.