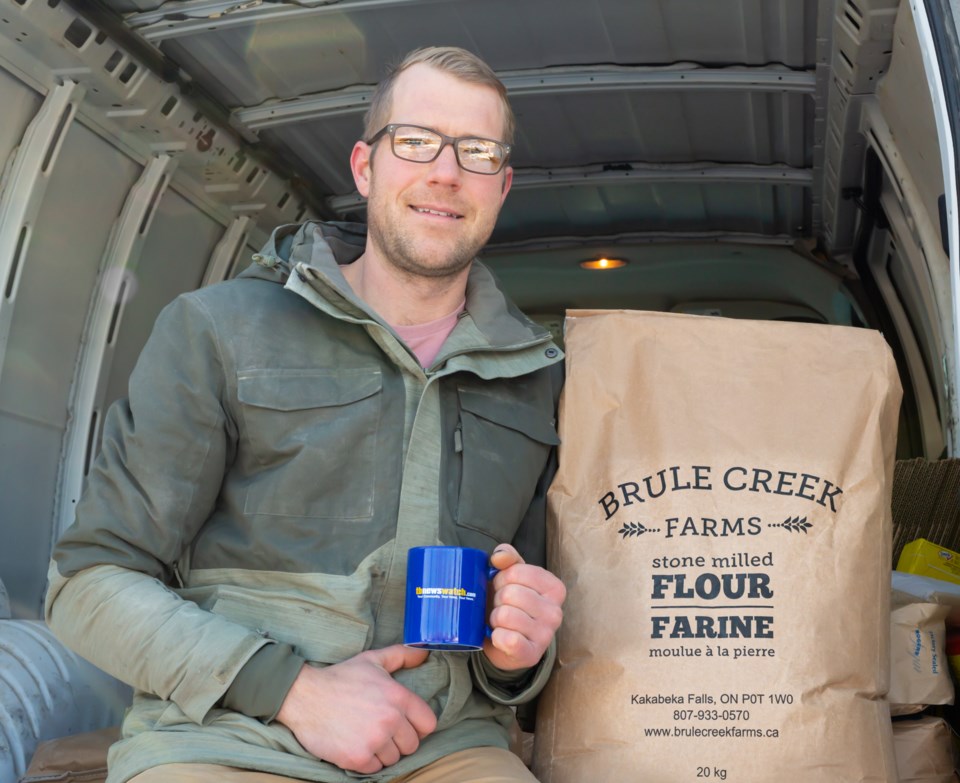 THUNDER BAY -- It was 12 years ago that Jeff Burke bought an empty piece of property, planted 17 acres of wheat, built a mill and started Brule Creek Farms. Today he grows rye and canola as well, farming approximately 320 acres total, including land he rents in addition to his own.

Northwest Ontario has several dairy farms and Burke grew up on one himself, but he was the first to start selling wheat and rye flours in the city. He says some dairy farmers have started growing grains as well, after one of the grain elevators in Thunder Bay started accepting grains from trucks in addition to railway cars.

Most of Brule Creek Farms’ products stay in the area, however. In addition to canola oil, wheat and rye flours, there are a variety of baking mixes and a fish batter mix. Maltese Grocery was one of the first stores to carry Brule Creek flour, but now there are about a dozen more retailers in the city. Burke supplies to restaurants as well, with Both Hands Wood-fired Pizzeria and Bakery using Brule Creek flours almost exclusively. (The spelt flour Both Hands uses is not grown by Burke; it comes from Manitoba but Burke mills it for Both Hands.)

“The very first place I sold was at the Country Market,” Burke says. “I started the mill in November [2008] and the same week I was at the market.” It has been a great place to advertise; over the years Burke gained many loyal customers, but with so many places where you can buy Brule Creek products, (including supermarket chains such as Safeway and Metro) he decided to close his stall at the market. (You can still find his products at the Market Store, on the first floor of the Country Market.)

Burke only mills as much flour as is needed. “I mill two days a week. The oldest flour in my mill is a month old at the most,” he says. He does deliveries twice a week, so retailers can have their shelves restocked frequently, instead of receiving a huge shipment that takes months to sell.

Brule Creek flour is ground whole the traditional way, with stones. At large-scale processing facilities, the bran is removed from the wheat before it is ground, to make the all-purpose flour we know. Some of the bran is then added back in to make whole wheat. At Brule Creek, the whole grain is ground; bran, germ and all, to preserve the grain’s flavour and nutrients. The “partially sifted” is Brule Creek’s version of all-purpose. It is not as white as what you would get from the supermarket, but is their best-selling flour.

Burke hopes the future will include more collaborations with other local businesses and organizations. “I’ve worked with Sleeping Giant Brewing Co. [to make the beer bread mix] and the city to make muffin and cookie mixes for their long term care homes. I’d like to work with more businesses to develop specialty products,” Burke says.