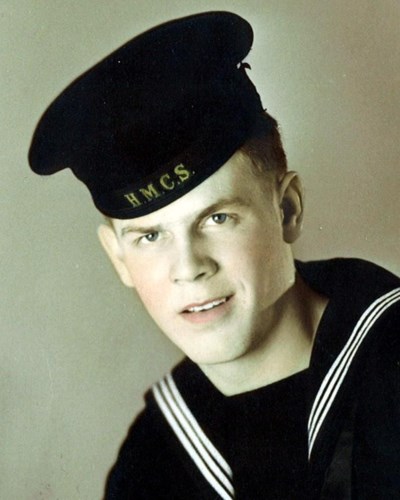 It is with very sad hearts that we announce the passing of Mr. Alexander Isaac Kraft, age 85 years, resident of Thunder Bay. Alex passed away suddenly on the evening of Friday January 8th, 2010, in the loving company of his daughter Joan.

Alex was born and raised in Port Arthur; his early days as a Vindictive Sea Cadet filled him with a deep appreciation of the open water, boats and ships that remained with him throughout his life. Alex saw active duty in the Pacific during World War Two serving on the HMCS Uganda. In his early years, Alex worked at the Port Arthur Shipyards; after the war, Alex went to Kitchener where he met the love of his life, Gloria Baechler. The two married and returned to Port Arthur. Alex retired from the Canadian Grain Commission in 1983.

Alex enjoyed the outdoors, especially time spent at his camp that he built and later at his daughter’s camp on Lake Superior. Alex was a talented handyman and cook; he enjoyed reading and conversing on a wide range of topics. He especially enjoyed time with his chums for their daily coffee ritual at McDonalds. Alex loved travel, from the simplistic car ride to more adventurous trips planned by his daughter Karen. Alex was an active member of Knox United Church, 55-Plus, and The Royal Canadian Naval Association.

Alex was predeceased by his wife Gloria who was always in his heart and thoughts. Independent, and resilient, Alex remains an inspiration to his daughters Karen Kraft Sloan (Tod), Joan Kraft-Bietz (Alan), and Alexandra Kraft-Willson (Don). He was an adoring Poppa to Jessica, Patrick (Rebecca); Kyle, Curtis; Tyler, Emily and Cameron.

Alex was the last surviving child of Emma and William Kraft; he is predeceased by his parents, sisters Hilja, Anne, and Ida, and brothers Bill and Bob. He is survived by several beloved nieces and nephews.

To the end, our father fought for life and his independence. His family was the most important thing in his life. His caring and concern was lovingly demonstrated up to his final moments. And in keeping with his love for life, minutes before he passed, he had asked the question, "So, what are we doing tomorrow?"

Funeral Services for the late Alexander Kraft will be held on Saturday, January 16th, 2010 at 11:00 a.m. in Knox United Church, 1 Shuniah Street, officiated by Rev. David Silliman. Visitation for family and friends will be held one hour prior to the time of Service at the church. IN LIEU of flowers, if friends so desire, donations may be made in Alex’s memory to the Emma and William Kraft Memorial (Finnish Language) Award c/o Lakehead University, Office of Advancement, 955 Oliver Road Thunder Bay, ON P7B 5E1 or The Naval Heritage Fund c/o the HMCS Griffon, 125 North Algoma St. Thunder Bay, ON