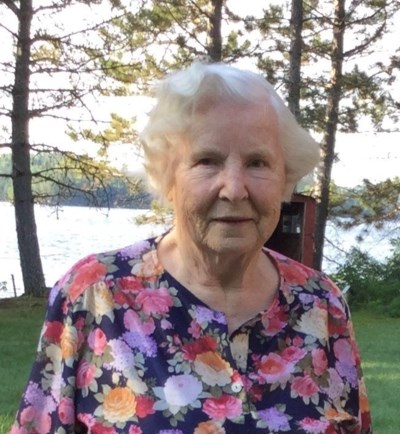 It is with great sadness the family announces the passing of Annikki Hansen, after a brief illness on Monday, June 14th, 2021 at St. Joseph Hospice.

Annikki was born October 21, 1928 in Sievi Finland. She grew up in the midst of the depression with her mother and her sister Eila. She excelled academically, winning the top student award each year in elementary school. The family relocated to Hämeenlinna where Annikki completed her education as a bookkeeper. At the age of 22, Annikki's adventurous spirit led her to seek a better life. June 3, 1950 Annikki joined her parents who had emigrated to Intola, a farming community outside of Port Arthur. She secured employment as a cook at the area bush camps and with dogged determination, she taught herself to speak and read English.

Shortly after arriving in Canada, she met a handsome, young man who came to visit her father's mink farm and as they say, “The rest is history”. Annikki and Raymond were married on Groundhog Day in 1952 and were soul mates for 69 years. They settled on the Hansen homestead. Annikki became a homemaker and farmer. She raised three children and she used her bookkeeping skills to operate the farm as a small business. Annikki also found time to provide guidance, support and friendship to newcomers in the area. Her warm and caring personality cultivated friendships that lasted her lifetime.

Annikki was the family matriarch to four generations and her kitchen was the centre of her universe. Finnish pancakes, pulla, blueberry pie made with blueberries picked at Scotch Lake and endless cups of coffee welcomed one and all.

She is survived by her loving husband Raymond, son Jack (Cheryl), daughters Evelyn (Bob) Armstrong and Mary (Doug) Chadwick. She will be deeply missed by her grandchildren Joshua (Natasha), Emily (Parker), Clinton (Erin), Michael (Colleen), Ashley (Michael), Karlie (Alex) and Sarah. She was also blessed with twelve great-grandchildren. Also surviving are sisters Eila Pesu (Vaino) in Finland and Tuula (Fred) Rinella in Toronto.
Annikki was predeceased by her parents, Armas and Amalia Oikari and an older brother Arne Oikari.

The family is grateful for the efforts and care provided to Annikki by the TBRHSC emergency and 2A staff. The compassionate care shown to Annikki and her family by the June 11th AmbuTrans medical attendants, and St. Joseph's Hospice was exceptional. We thank you.

A private funeral will be held at 9:00 a.m. on Saturday, June 19, 2021 in the Chapel of Sargent and Son Funeral Home. Those wishing to attend the service virtually may do so via the Sargent & Son Facebook Page. In lieu of flowers, donations may be made to the charity of your choice. Online condolences may be made at www.sargentandson.com.

To send flowers to the family or plant a tree in memory of Annikki Elin Hansen, please visit our Heartfelt Sympathies