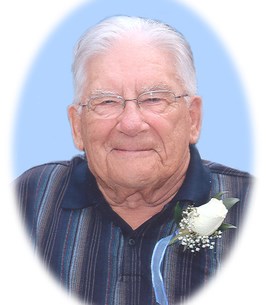 34,546 days after his birth on July 10,1925, Bennett (Ben) Joseph Lapenskie died in Terrace Bay, ON, in his 94th year, at Wilkes Terrace leaving a legacy of family, friendship and love.

Ben worked almost his entire career for the Ministry of Natural Resources and Forestry and often bragged he was paid longer for his retirement than his years of service. But service was his calling and in the flailing years of the Second World War, he became eligible to serve and went overseas with the RCAF - thankfully not in a combat role, ‘'cause he'd been trained as a tailgunner”. As the war wound down, Ben returned to Hearst, in northern Ontario, to begin a lifelong career with the Ontario Ministry of Natural Resources and Forestry (Lands and Forests). With stints in Hearst, Kapuskasing, Hornepayne and Pays Plat, he would finally settle in a new office in Terrace Bay as Chief Ranger. It was here that his family would spend their formative high school years and he and Georgie would devote many of their giving hours to their community. Ben worked tirelessly, after hours, building and renovating houses (often for his family), and to provide for his family, while establishing a reputation for quality and steadfast work that would lead his family for decades - if you wanted quality work, Ben Lapenskie was your guy!

Ben's extracurricular activities provided his family with opportunities to explore Canada from coast to coast. With seven kids packed into the family station wagon, and a 16 foot travel trailer in tow, Ben set out to show his family the wonders of Canada. From Victoria Island in BC to Newfoundland/St. Pierre Miquelon, his family saw more than most Canadians would. Ben took early retirement from the Ontario Govt and he and Georgie moved to BC where, together, they built their dream home in Grand Forks and lived happily: tending gardens, toasting champagne and enjoying Sunday suppers by the fireplace for 26 years. In 2008, they decided to move back to Ontario to be closer to family, and they relocated to Thunder Bay (Parkdale area), until increasing age dictated a move to assisted living at Glacier Ridge. The details of dementia started to weigh heavily on decisions and Ben was finally moved to Wilkes Terrace Long Term Care in Terrace Bay where he was well treated, received wonderful care from all the staff, and we think leaves a lasting impression.
Ben Lapenskie leaves us with many important life lessons: do the best you can, family matters, and for any problem, there is a fairly simple solution. He was filled with wit and loved to engage in banter, and you may have been lucky to hear him say once or twice, “don’t go away mad, just go away” (only one of the famous “Ben-isms”). Gone but never forgotten - we love you!

Funeral Services will be held on Friday, February 14, 2020 at 11:00 a.m. in St. Dominic’s Church when family and friends will gather for funeral Mass celebrated by Rev. Mike Mahoney. Interment of ashes will take place at a later date. In lieu of flowers, donations can be made to The McCausland Hospital and Wilkes Terrace Long-Term Care in Terrace Bay.