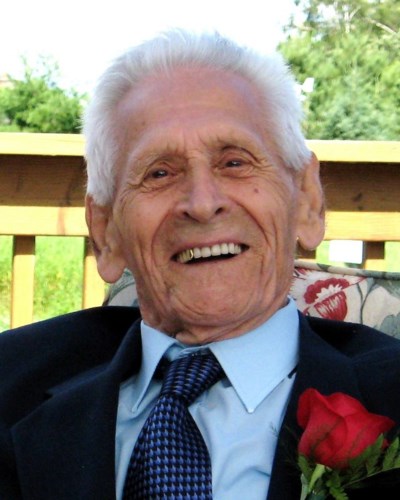 Clarence was born on Welsh’s farm in Pearl, Ontario on August 24th, 1916 and he was raised and educated in the district. In his early years Clarence had numerous jobs which included working in the bush, in the mines, on the railroad until his final job as a millwright with Abitibi Thunder Bay, retiring in 1976.

In his younger days, Clarence enjoyed trapping, snowshoeing, fishing, hunting and being a Deputy Game Warden as well as playing baseball and broomball. He also enjoyed dancing, music, gardening, camping and carpentry.

On August 17, 1945 he married the love of his life Dorothy Estelle Wright. Clarence was a family man; family meant everything to him. Being a perfectionist, every job had to be completely finished and done perfectly. Clarence worked hard all his life and he appreciated what this allowed him to do for his family. He earned everything that he worked for. Clarence was a very proud man and he had a lot to be proud of. He was always there to lend a helping hand wherever and whenever one was needed. As a husband and father, he was the tower of strength for each and every one of us. His values in life live on his family. The stories of his experiences during his lifetime enthralled everyone who heard them. Clarence was also known for his sense of humour, quick wit and firm handshake. He had a smile for everyone and when you saw the twinkle in his eye or the wink, you usually knew that he was up to something.

Clarence was left broken hearted on March 18, 2004 when his loving wife Dorothy Estelle passed away. He was also predeceased by siblings Samuel, Gertrude (Frost), Herman (Jimmy), half brother Norman Gregory and by his parents Sarah (Gregory)) and George Hand and other relatives.

As per Clarence’s wishes, cremation has taken place.

Funeral Services for the late Clarence Hand will be held at 11:00 a.m. on Monday, January 11, 2010, in the Chapel of Harbourview Funeral Centre, 499 North Cumberland Street, officiated by Rev. Ed Swayze of St. Stephen The Martyr Anglican Church. Interment will take place at a later date. Visitation for family and friends will be held one hour prior to the time of Service.

In lieu of flowers, donations in Clarence’s memory to a charity of your choice or St. Stephen The Martyr Anglican Church would be greatly appreciated by the family.

God saw you being sad as you

Waited at the gate

So he came down from Heaven and

Brought back your loving mate

Now you need not think of the past,

Mom is beside you

You’re together forever at last.


On-Line Condolences may be offered at