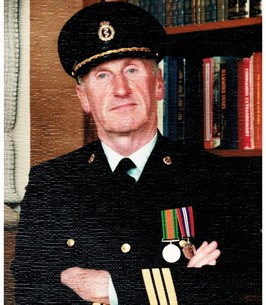 There were no more rabbits in the hat. On July 11, 2019 , after over seven years of surgeries and challenges and recoveries that defied belief, Sam died at home, according to his wishes, in the presence of family.

His life was long and full. It was a life of service to his country, to his profession, to his community, and to his family.

Sam was born in Glasgow, Scotland on November 22, 1925. He served with the British Army in India and Malaya from 1944 – 48, and upon discharge, entered medical school at the University of Glasgow. His medical career spanned over 60 years, and he only very reluctantly retired at the age of 85. As a surgeon in the Royal Canadian Air Force in Goose Bay, Labrador, followed by private practice in communities in Northern Ontario including Marathon and Manitouwadge, he provided his care, skill and compassion to thousands of patients. Sam was the preceptor for many medical students during this time through the Northern Ontario Medical Program, the precursor to the Northern Ontario School of Medicine. At the age of 55 years, he put down the surgeon’s scalpel, and returned to university to pursue a Masters of Public Health at the University of Minnesota. Sam served as the Medical Officer of Health in the District of Thunder Bay on a full time basis for 10 years, followed by periodic locums, when requested.

Service to the community continued when he took the position as the first Medical Officer at the newly established Thunder Bay Plasma Collection Centre. The abrupt closure of this community resource in 2012 which had been supported by many dedicated staff and volunteers, was a large and lingering disappointment to him.

A leader and visionary with a strong will and determination enabled his oversight of the building of a new hospital in Marathon in 1971 and the design and construction of the new Thunder Bay District Health Unit in Thunder Bay in 1989 (among many detailed design decisions, he insisted that the windows could be opened!).

Sam was privileged to serve in an honorary capacity as Colonel of the 18(Thunder Bay) Medical Company and 18(Thunder Bay) Field Ambulance for over 20 years. He particularly enjoyed the opportunity to put on his combats and head out into the field on exercises with the troops. His legacy lives on with the annual presentation to one deserving soldier each year of the Colonel Samuel Graham “Esprit de Corps” trophy. For many years, Sam also served as the Brigade Medical Officer for the Thunder Bay Branch of St. John Ambulance.

A man of many interests is reflected in his extensive collection of books, magazines and music. Until his body would no longer allow, he led an extremely active life, pursuing activities such as running, walking, kayaking, downhill and cross country skiing and gardening to name only a few. He enjoyed sailing and cruising the waters of Lake Superior on a number of craft, graduating from a 12’dinghy to the final, more comfortable 32’ Pyxis, but his love was always strongest for the lovely lines of his 26’ wooden Folkboat, Mingulay.

A proud and true Scot, he appreciated fine single malt scotch and the sound of the bagpipes. He longed to return one last time to the valleys and glens of the Highlands. His Scottish humour and the twinkle in his blue eyes will never be forgotten.

Survived by his second wife Sylvia, children Colin, Peter, Airlie, Alasdair and Krista; grandchildren Adam, Tessa, Nicholas, Lili, and Carter and several nieces. He will be sadly missed by all. His wife, Mary Ellen has lost her soulmate, friend, confidante and companion of the past 30 years.

A sincere thank you to all of those who have provided care over the past number of years, but especially to Dr. Steve Klassen and Dr. David Puskas for their extraordinary care, honesty, professionalism, and respect. In his final stay in hospital, the efforts of Dr. Olga Kisselgoff, Dr. Paul Watson and Dr. Rory Silverberg to keep Sam comfortable are truly appreciated. Nursing and other staff at both TBRHSC and SJCG were always a model of compassion and care. Immense gratitude to Dr. Kevin Miller who provided the family with the courage and permission to let go and bring Sam home. The family is also thankful for the support of the community palliative care and respite services during Sam’s final weeks, days and hours.

And finally, there are no words to adequately express our appreciation to Dr. Steve Klassen for his presence, support and guidance to Mary Ellen and family through the final leg of Sam’s remarkable journey.

Funeral services will be held on Thursday, July 18, 2019 at 11:00am in Lakeview Presbyterian Church. Private interment will take place at a later time. Arrangements have been entrusted to EVEREST FUNERAL CHAPEL, 299 Waverley at Algoma.

Sam – you showed us what courage, strength, and resilience look like – and we should all strive to face adversity as you have demonstrated to us.

The Graham Clan motto is Ne Oublie – and we shall not, ever, forget.