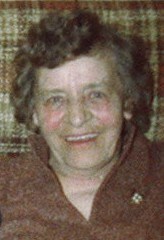 It is with profound sadness that we announce the passing of Esther Sylvia Mackie, nee "Rajala" at the age of 95 years.

Esther was born in Nolalu on Dec. 25, 1914. She married George Mackie and lived in Nakina, Ont., for many years. After George’s passing, she returned to Thunder Bay and lived independently until her death.

Esther’s life was filled with love, laughter, jokes, and her stories of fun. She enjoyed playing sports including baseball and her favourite – curling! Esther bonspieled all over Northwestern Ontario. Esther was a lifelong member of the Royal Canadian Legion, Branch 116 in Nakina, and a Past President and Treasurer of their Ladies Auxiliary. Esther was Nakina’s barber and gave most of its boys their first haircut. All of her friends had a china teacup for her to enjoy her coffee. Esther enjoyed travelling in her Imp-a-la to visit family and friends.

Esther is survived by her beloved nieces and nephews; and her sister-in-law Bernice Mackie. She was predeceased by her husband George Mackie; parents Samuel and Katarina Rajala; sister Fannie; brothers: Armas, Felix, Sulo and Herbie.

Auntie Esther was the keeper of our family histories and made sure we knew our roots.

Esther will be deeply and sadly missed every day, and we were privileged to have her as a friend.

You are loved Edder.

If friends so desire, donations may be made in Esther’s memory to the Heart and Stroke Foundation, Community Living Thunder Bay, or to the Royal Canadian Legion, Branch #116, Nakina, Ontario.

Online condolences may be offered at http://www.harbourviewfuneral.ca