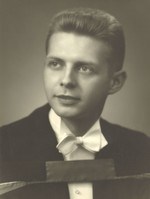 The son of a Vimy Ridge and Passchendaele veteran, he enlisted as a boy solider in 1943 and attained the rank of Second Lieutenant.

George received his M.D. in 1952 from the University of Toronto. While interning at Toronto General Hospital, he met Mary and they married in 1957. After one year as a family doctor at the Moffat Clinic in Port Colborne, he did his internal medicine residency at the Royal Victoria Hospital in Montreal, and the Toronto General Hospital, earning his fellowship in Internal Medicine from the Royal College of Physicians and Surgeons. From 1958 to 1995, he was a partner in the Fort William Clinic in Thunder Bay. After his retirement from the clinic, he continued to practice medicine in various roles until 2014.

George was a committed and active volunteer for his profession and his community. His long involvement with the College of Physicians and Surgeons of Ontario culminated in his service as President from 1990-91. In his community, he volunteered on numerous boards and committees, including the Thunder Bay Community Foundation and the Alzheimer’s Society of Thunder Bay.

Politics were an enduring interest for George and he was a member of the local Liberal riding association for over 50 years. He served as President of the Fort William Liberal riding association from 1967-69, and was a delegate to the leadership convention in 1968, helping to set off Trudeaumania. George’s spirit of adventure took him around the world and across Canada. In 1947, he was a crew member aboard the RMS Nascopie when she was shipwrecked in the Arctic. Memorable among our family vacations was a car trip through England and Scotland in 1972. His favourite trip was one he and Mary took to India in 2000.

George’s kind and gentle nature earned him many enduring friendships from his university days, his medical career, his many pursuits, and our family home on Silles Court where the family rink was a magnet for the neighbourhood kids.

George loved to ski and to golf, pastimes he shared with his children and grandchildren. He took his last run down a ski hill just four years ago and played his last round of golf three years ago.

Profound thanks to all the staff of the Thunder Bay Regional Hospital, and particularly to the nursing staff on 2A and Dr. Janet Noy for their outstanding dedication and compassion.

He will be deeply missed and loved forever.

George wanted us all to keep up the fight against climate change. Please consider making a donation to the Dr. George and Mary Morrison Family Fund, which has a focus on the environment, at the Thunder Bay Community Foundation (Chapples Building, Suite 312-101 N. Syndicate Avenue, Thunder Bay, Ontario P7C 3V4 or www.tbcf.org) or the charity of your choice. Online condolences may be made at www.sargentandson.com.