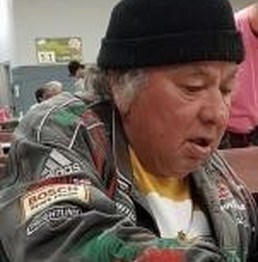 Harry Wynn was a man of many titles from father, husband, brother, son, uncle, cousin, and friend but his most important role was being a grandfather. Harry was a great conversationalist who enjoyed the company of many people throughout the city of Thunder Bay, often leaving a memorable and loving impression with those he encountered.

He lived his life to the fullest, enjoying his walks and bus rides around the city, taking in the sights and experiences it had to offer. Harry was also an avid bingo player and an extreme chicken and cheeseburger connoisseur.

Harry’s greatest pride was his grandchildren whom he would visit and spend quality time with. Predeceased by his wife Pauline Nowegejick-Wynn, and special friend Rhoda Kwandibens. His parents Lazareth Wynn & Jenny Wynn/Booth, as well as his siblings Allan Anderson, Edward, and Frank Wynn.

In lieu of flowers, donations can be made to Thunder Bay Shelter House to continue Harry Wynn’s tradition of ensuring everyone is cared for and has the necessities they need. Online condolences may be made at www.sargentandson.com.