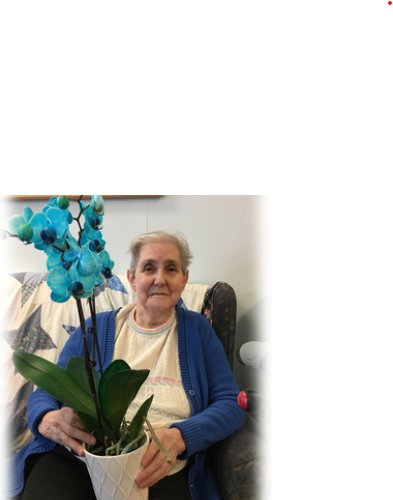 It is with great sadness that our family announces the passing of Ileana Bandiera on Sunday March 22, 2020 in the Thunder Bay Regional Health Sciences Centre, with her family by her side.

Ileana was born in Fiume Istria, Italy, presently known as Rijeka, Croatia on October 16, 1935 to Antonia and Silvio Grebaz. Ileana’s childhood was greatly affected by the events of WW2 and in 1943 along with her mother and younger brother, Aldo, sought refuge in Santa Domenica at her grandparent’s home. Her father was already involved in the war effort as part of the Italian army.

In 1947 Ileana’s younger brother was left with his grandparents while she travelled with her mother to Italy to join her father. There they spent the next 2 years in a refugee camp in Brescia, Italy.

In 1949, both Ileana and her brother were sent away to school and rarely saw any family members as their parents began to rebuild their lives following the war.

In September 1951, at the age of 15, Ileana was reunited with her mother and brother and took shelter in the same refugee camp that their father had stayed in months earlier in Bagno, Vignoni while he was waiting for his paperwork to emigrate to Canada. The family remained in the camp until December 08, 1951 before being transferred to yet another refuge camp in Bremen, Germany. They remained there until mid February of 1952 at which time they were given their proper paperwork allowing them to board the “Anna Salen” for a fourteen-day trip to Pier 21 in Halifax, Nova Scotia, Canada. Ileana, her mother and brother traveled by train to Port Arthur, present day Thunder Bay, where they met her father and began their new life in Canada.

At 16 Ileana went to work at St. Joseph’s Hospital in the kitchen to contribute to the family income. There she met several young women Juliana Levanto, Christina Falcigno and Anna-Maria Dimine who became lifelong friends. Although Ileana was a shy person, she was the type of person that held her friends very dearly.

Ileana met her future husband, Livio Bandiera, by chance when he spent a few months in a boarding house in Port Arthur owned by friends of Ileana’s parents. Livio was making his way west from Halifax after arriving from Italy in 1952. Although Livio had continued his journey westward in pursuit of job opportunities, he had the intention of one day marrying Ileana with whom he had become very smitten. Ileana regularly received letters from Livio outlining his adventures and expressing his love for her.

In the fall of 1956 Livio returned to Port Arthur after Ileana promised to marry him. On December 15, 1956 Ileana and Livio were married in St. Anthony’s church on Banning Street in Port Arthur. They settled down and within a year and a half started their own family.

Although Ileana had faced many hardships during her childhood, in adulthood she had a positive attitude and a warm smile. She was a hardworking person that never complained and never wanted anything for herself other than to be with her immediate family. Ileana and Livio spent over sixty years together and raised four children. In the late 80’s they built their dream home on Mapleward Road. Christmas at their home was always filled with Ileana’s homemade cooking and baking. Friends and family regularly stopped by to say hello and enjoy food, drink and friendly conversations. They traveled back to Italy several times throughout the years to visit relatives from both sides of the family. They also travelled throughout Canada and the US to visit family and friends. Once grandchildren began to arrive, Ileana enjoyed spending time with them. Ileana enjoyed knitting and constantly gifted slippers, hats, sweaters, mittens and blankets to her family and friends.

Ileana was predeceased by her parents, Antonia and Silvio Grebaz; in-laws Geneoffa and Alphonso Bandiera; sister-in-law Santina Grebaz and brother-in-law Frederico Bandiera as well as her niece Denise Bandiera and three years ago by her husband, Livio Bandiera.

The family wish to thank Doctors Black and Miller, and the nurses on A1 at TBRHSC for their compassion, while Ileana was in their care. Thank you to nurse Amanda; P.S.W.’s Toni and Michele; Sandra in the office; Nancy (kitchen) for taking the extra time and care of Ileana while she was at Southbridge Lakehead.

As per Ileana’s wishes, there will not be a funeral or celebration of life. Donations may be made to the Alzheimer's Society in Ileana’s name.