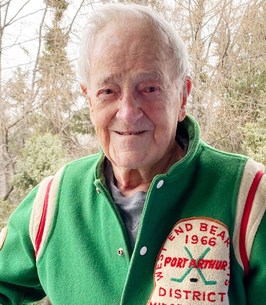 After a long and adventurous, love filled life, Jack Alexander Brown crossed over to God on May 30th, 2021.

Jack was born in Port Arthur to parents Jack and Sonja, and brother to Verna and Anita.

Jack had many happy memories and loved to share stories about his life experiences. As a boy he was proud to become a King Scout Patrol Leader. As a young man, he was an Air Force cadet who was selected to tour U.S Air Force bases in the 1940’s. He was recognized for his expert marksmanship which is documented in the Thunder Bay Military Museum. He was an exceptional athlete and was chosen to attend the Lake Couchiching Athletic Training Camp in High School. He also excelled at Football and played for the 1949 PA Mustangs team that won the Western Canadian Championship.

Jack developed a love of coaching Hockey at the young age of seventeen, when he won his first of many city and district championships. He went on to coach for the Westend Bearcats for thirty years and then moved to the stands to cheer on all of his grandchildren, while giving them expert advice.

Jack had a long and rewarding career with Air Canada where he made life-long friends. He held an executive position with CAW and worked hard to better the working conditions of fellow employees.

Jack had many happy family memories made on numerous family trips to Mexico and the Caribbean, wonderful times at Trout Lake, and a lifetime of outrageous fun and laughter at their Amethyst Heights home. He had a very special relationship with his grandchildren and treasured his hunting and fishing trips with his grandsons and cherished the time spent with his favourite granddaughter.

He loved Happy Hour and his door was always open to family and friends, especially his grandchildren. His quick wit, sense of humour, and one liners will keep us laughing forever. He was defined by his love of animals and the great outdoors.

The Family would like to extend their sincerest gratitude to the staff at TBRHSC for their truly excellent care and compassion.

Jack liked to quote “everyone who lives dies, but not everyone who dies, lived.” Jack truly lived.

“Home is the hunter, home from the hill.”

A private family service has been held.

If people so desire; donations can be made to the Humane Society, War Amps and Salvation Army or the charity of your choice.