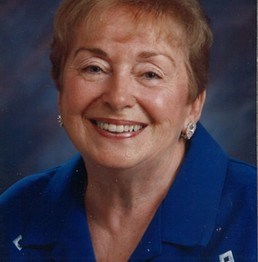 It is with broken hearts that we announce the passing of Joan Dolores Inglis at St. Joseph’s Care Group on Thursday, May 9, 2019 at the age of 85.

Joan was born in Port Arthur, Ontario on May 15, 1933. She attended St. James Public School and Central School for Grade 8. She also attended Port Arthur Collegiate Institute and then graduated from King’s Business College. She was employed as a secretary at Northern Wood Preservers at the time of her marriage in 1952 to Tom Inglis, a marriage that lasted 58 years.

In her earlier years, she was president of the Port Arthur Jaycettes and spent 20 enjoyable years as a Jaycette member. She volunteered for many years at the Port Arthur General Hospital. She was a member of Trinity United Church and enjoyed many years volunteering with the popular Dessert of the Month. Joan graduated as a Registered Nursing Assistant once her children were grown. She was active in curling for many years and also loved dancing and singing. She was still involved with a wonderful circle of friends in her Bridge Club. A loyal Toronto Blue Jays fan, Joan rarely missed watching a game.

Joan took great pride in keeping a neat, organized home and loved entertaining friends and family with her wonderful cooking and baking skills. She was a huge support to her husband Tom in his very busy career and they had the opportunity to travel to many destinations. She spent summers at her camp at West Loon Lake and part of many winters at her condo in Florida. She was fortunate to have gone on several cruises with her family, the last one to the Southern Caribbean in February of this year.

Joan was the matriarch and central driving force of our family. She was so proud of her children’s and particularly her grandchildren’s accomplishments. She loved meeting all their friends as well. Although there is a huge void in our lives, we have so many positive, happy memories to cherish.

The family would like to thank the staff at St. Joseph’s Care Group for their kind and compassionate care over the last month.

Cremation has taken place, and a service and reception will be held on Wednesday, May 29, 2019 at 11:00 a.m. at Sargent & Son Funeral Home, 21 North Court St. with Rev. Randy Boyd officiating. A private family interment will be held at Sunset Memorial Gardens. If friends so desire, in lieu of flowers, donations to the T.B.R.H.S.C. Foundation would be greatly appreciated. On-line condolences may be made at www.sargentandson.com.

We will miss you forever Mom, Nana, Great-Grandma.