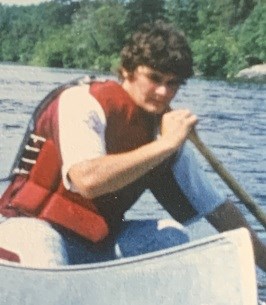 Mr. John Richard Rhoades, age 55 years, passed away peacefully at Hogarth Riverview Manor on September 5, 2019 with family by his side.

John was born in 1964 in Fort William to John and Margaret Rhoades.  In 1987 John graduated from Lakehead University with a degree in Mechanical Engineering.

He loved whitewater canoeing with his friends, playing pool, investing in the stock market and watching sports and news. John’s greatest passion was cartooning.  Cartooning provided him with a creative outlet and was often a platform for his social commentary.

At the age of 26 John was diagnosed with MS and bravely battled this disease. Independent and determined, John moved to Toronto shortly after his diagnosis and returned to Thunder Bay when he was no longer able to live on his own.

He was predeceased by his father John, grandparents John and Theresa Rhoades, Ida and David Silvaggio and uncle Francis Soldera.

A private graveside service will be held at a later date. If friends so desire, donations made in memory of John to the Multiple Sclerosis Society of Canada for research would be greatly appreciated.

Many thanks to all of the staff of Hogarth Riverview Manor - 2N Lavender for their wonderful care and compassion. You were like a 2nd family to John. Thank you to Steve Robertson for his comforting prayers during this most difficult time.