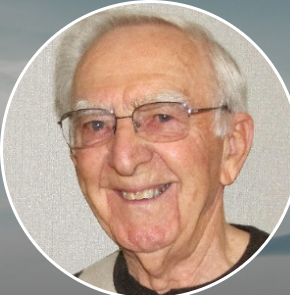 It is with great sadness that the family of John Russell (Russ) Gascoigne announces his passing on Tuesday, December 10, 2019 with family at his bedside. Russ was born in Toronto on May 3, 1928, the second of 5 children. He moved to Fort William as a young child and grew up in Westfort. He graduated from F.W.C.I. and continued his studies at the University of Toronto and graduated in 1952 with a degree in Pharmacy. He met Valerie Jean Franklin in 1949 and they were married in June 1953. He worked in a variety of pharmacies before starting his own business in 1963 (Gascoigne’s Drug Store) and was affectionately known by both customers and staff as “Mr. G.” This was followed by the opening of several other business ventures; including 3 locations of Val’s Card & Party Shop (Hallmark) as well as The Travel Associates.

Dad was the President of the Pharmaceutical Association of Ontario in the early 1970s. He was a board member of the Fort William Figure Skating Club as well as a board trustee for the Lakehead School Board. He was an active member of the Masonic Temple, St. Thomas Anglican Church and the Gyro Men’s Club for many years. He was a member of the Thunder Bay Executive Association and was President in 1987. Dad was a real philanthropist, donating to over 20 charities annually. He and his wife Val were patrons of the Thunder Bay Community Auditorium. They also both enjoyed attending dinner dances where they dazzled the crowd with their ballroom dancing skills. He was an avid sportsman, enjoying tennis, badminton, skiing, racquetball, golf and curling.

Russ leaves behind his beloved wife of 66 years, Val, 4 children, Roxanne, Derek (Georgia), Guy (Michelle) and Lorna (John), 8 grandchildren, Duncan (Dee), Hilary (Andy), Brienne (Brian), Bianca, Marc, Mallory, Drew and Gabrielle as well as 7 great grandchildren. He also leaves behind his sister Shirley and his brother Gerry (Susan). He was predeceased by his parents Hester and Edmund Gascoigne, his brother Gordon and his sister Mary Lou.

A big thank you to those staff members on Hogarth Riverview Manor’s 6th floor, who gave such special care to our father.

Cremation has taken place. Funeral services will be held at St. Thomas Anglican Church on Wednesday, December 18 at 11:00 am. In lieu of flowers, please consider donating to the Alzheimer Society.