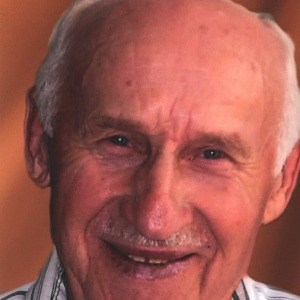 It is with heavy hearts that the family of Kaz Mazur announces his peaceful passing on Saturday May 9, 2020 after a well-lived ninety-two years of life.

Born on the family farm in Meleb, Manitoba Kaz was one of eight children born to Ukrainian-immigrants Karl and Irene Mazur. From an early age Kaz showed himself to be full of life and never shied away from adventure or the subsequent trouble that he found himself in. Kaz loved to dance, especially polkas and waltzes, and in his younger years would sneak into churches to get into dances for free. He also enjoyed roller-skating and the attention he received from all of the girls there who wanted to dance with Kaz Mazur. By fourteen, Kaz was making moonshine with his older brothers and, even recently, would laugh as he remembered getting drunk off of the seventy-proof fumes with them.

Despite the uncertainty that World War Two brought Kaz decided to venture off on his own and left home at sixteen; over the next forty-four years his work ethic would thrive in the motley of jobs that he found himself in. Kaz’s first job was as a welder at McDonald’s Air Plant shortly followed by Canada Packers, which would later become Maple Leaf Foods. Next Kaz worked for CN Rail where he was a fourth-cook washing dishes and peeling potatoes, but when the charcoal from the trains started making him sick he was on to his next adventure. Kaz headed to Toronto where he first worked in a quilting shop, putting liners in coats and jackets, and then as a picker on a tobacco field during the summer for ten-dollars-a-day. After Toronto came Sudbury, where he worked for Hydro where a loaf of bread, tin of sardines, and a coke was breakfast.

The next stop for Kaz was Caramat where he jumped off a freight train and stayed for fifteen years at a bush camp. As a yard operator he was responsible for carrying wood into camp from the bush, which allowed him to be where he truly loved: outside. It was here that he found his first real home since leaving the family farm all those years ago. While at Camp 53, “The Kags Club”, the men had a softball league to help while-away the hours, with Kaz being the pitcher for his team. While in Caramat Kaz also took a Barber course in order to make extra money while in the bush where men in need of a haircut were never in short supply. It was while working in Caramat that Kaz met his future wife, Hilde, a ‘cookie’ in the kitchen of the same bush camp that he was working.

After getting married and having two children, Robert and Diane, Kaz and Hilde eventually moved to Port Arthur (Thunder Bay) when their son Robert was of school age. Kaz was able to get a job with Great Lakes where he stayed until he retired at sixty. Retirement wasn’t going to slow Kaz down, however, as he could always be found either working on a car, his or his daughter’s, or in the work-shed in his backyard. Kaz was always fixing something. From building fences, sheds, and decks for his kids to rocking chairs, play houses, and wagons for his granddaughter, Kaz was constantly looking for ways to help his family the best way he knew how – with his hands.

Kaz was a warrior and no matter what he was dealt with in life he faced it with determination and strength; he was able to find humour in any situation and was always quick to laugh and share a story. In their final months together his daughter would always say to him: “Don’t get into any trouble,” and with a laugh and an easy smile Kaz would respond: “What trouble can I get into?” A troublemaker for life Kaz, and his constant smile, will not soon be forgotten.

Kaz will be sadly missed by his wife of sixty-three years Hilde and his children Robert Mazur and daughter Diane Schaller. Kaz, or ‘Opa’, will be lovingly remembered by his granddaughter Latasha Deleo (Rob). He will also be forever remembered by his numerous nieces, nephews, and dear friends. Kaz was predeceased by his parents Irene and Karl Mazur; his siblings: Walter Mazur, Ann Rogoski, Pauline Marchak, Mike Mazur, Steve Mazur, Vicki Mckee and Tony Mazur; and son-in-law Frank Schaller.

A heartfelt thank you to the PWS’s at St. Elizabeth and especially to nurses Madison, Ashley and Sydney - you treated Kaz with great respect and the compassion that you showed him will not be forgotten. To Dr. Chan, Dr. Ramchandar, and Dr. Bezanson at the cancer clinic: thank you for taking care of Kaz and for helping make a difficult time a little bit easier. A very special thank you goes out to Dr. Chan’s nurse, Kim: even in the short time that Kaz was at the cancer clinic you became family and your words of encouragement during treatment helped us greatly and continue to do so. To Dr. Scali, thank you for the many years of being Kaz’s family doctor and for your recent phone call with him.

A celebration of life for Kaz Mazur will take place at a later date with funeral arrangements in care of Harbourview Funeral Centre. In lieu of flowers, if friends so desire, we ask that donations may be made in Kaz’s memory to The Northern Cancer Fund - The Garden of Hope at the Thunder Bay Regional Health Sciences Centre.