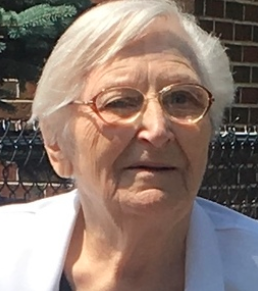 It is with a heavy heart that we announce the passing of Kazimiera Tablowski our loving and devoted mother and Babcia.

Born on January 17, 1929 in Poland, oldest daughter of the late Thomas and Katarzyna Braczyk. She was predeceased by her husband Anthony, in 1979.

Kazimiera was a strong, selfless and devoted daughter and sister, who cared for her mother and 3 younger sisters during and after World War II. In 1962 Kazimiera, her husband and their 3 young children immigrated to Canada, and made Fort William their new home. Her first job in Canada was working on a farm, followed by several years of working as a housekeeper/laundry aid at the Blue Swan Inn. She was then hired as a housekeeper at Grandview Lodge, home for the aged, where she worked until she retired.

Kay, as she was known by many, lived a full life as a wonderful mother, Babcia, homemaker and friend. She could always be found working in her backyard garden where she tended to her beautiful flowers and wide array of vegetables. Kay was an active member of St. Casimir’s Church where she attended mass weekly and volunteered much of her time pinching perogies. She had a passion for crocheting and took great pride in the blankets she made for her grandchildren and great grandchildren. Most of all she loved her family, and instilled in her children strong values that have served them well. Whether it was big family dinners, birthday celebrations or sharing tea and her famous homemade donuts and cheesecake with her family, Kay was always surrounded by love and laughter. She was survived by her 3 loving children, Tony Tablowski (Basia), Stan Tablowski (Etta) and Krystyna Smeltzer (Bill), her 7 grandchildren and 19 great grandchildren. She will be dearly missed and forever in our hearts.

A special thank you to the wonderful, caring and compassionate 4South Staff at HRM who became Kay’s second family, and gave her hugs and love when we couldn’t.

As directed by the Province of Ontario and the Bereavement Authority of Ontario, the attendance at the funeral/visitation is restricted to 30% capacity or less and a record of attendance must be maintained. Wearing of masks or face coverings by everyone and maintaining social distancing of 6 feet is mandatory for those attending the services.