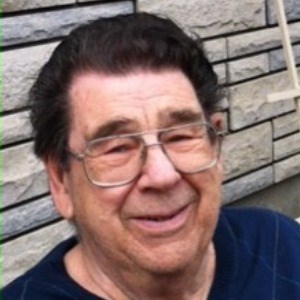 In the early hours of Monday, July 20, 2020, our father left us peacefully during his sleep after courageously surviving several health complications over the years.

Dad was born on September 18, 1937 at the Port Arthur General Hospital. He was born, raised and resided in the Riverdale Road area for his entire life. His parents legally named him Lawrence but to everyone he was known as “Bud.” The names that gave him the most pride were “Grandpa” or “Big Papa”.

He received his education at Riverdale Elementary School and then attended Selkirk High School. His long time career was at Lakehead Newsprint and he decided one day during his summer holidays that he wasn’t returning to work. He called them up and told them to “draw up” the retirement papers because “I am going fishing”.

Dad was an extremely simple man. He never needed a lot of material things or wanted to travel around the world. He enjoyed his family and sharing his knowledge. His grandchildren were his life and nothing brought him more joy spending time with them. He would travel to Wisconsin to visit his family as often as he could. He would pack something he made with love; whether it was some turnip or his tasty baking. The family always got something. Dad spent many hours in the kitchen baking us our favourites. He was known for his famous butter and marzipan tarts. Sometimes the grandchildren would get involved and he would spend hours teaching them his recipes.

Once the grandchildren were old enough to take fishing, he brought them to all his “secret” spots. Fishing was a passion of his. He would take his dog and pack a cooler with ice and gone for the day and he didn’t care who wanted to join him either. If dad wasn’t fishing you would find him outside sitting underneath his apple tree watching all the little critters and wildlife that would travel through his yard.

Throughout his life he always had a garden full of fresh vegetables but tomatoes were his favourite. He would spend hours puttering around making sure that they were taken care of and even spoke to; which is the reason to why everything grew so well; so he says. It brought him so much pleasure to share what he grew, he would gladly share his vegetables with whomever he could. Dropping off care baskets to neighbours, family and friends with a visit was something he did often and expected nothing in return.

When his brother Ray was alive they would go leeching at Mud Lake, and spend time fishing at their favourite lakes. In their spare time Uncle Ray and Dad would enjoy sipping tea and eating banana bread while sitting on the veranda with his nephew Brad (Tanya). Dad continued his visiting traditions after his brother passed which brought Brad and him closer together.

Some of dad’s activities and forms of entertainment were playing Rummoli with “girl” friends, bowling and heading to the casino. Chinese food was dad’s choice to treat the family for dinner. Many hours were spent practicing tricks with his Lucy. When given the opportunity dad would proudly have her perform.

Dad leaves behind his best furry companion Lucy. She was his sidekick, fishing and travelling partner and were inseparable till the end sharing each and every day together.

Our family would like to extend a huge thank you to all the staff of the Thunder Bay Regional Health Sciences Centre Emergency Department, 2B, 2C, 3B and 3C for all of your compassion, support and care that you provided our dad over the years. Much appreciation to the Emergency Response Teams that provided immediate care prior to each hospital visit that dad experienced.

To St. Joseph’s Hospital Rehabilitation team 5S and the Hospice unit 4N. A special thank you to his nurses Willow, Holly, Bronwyn, and Nadia of the Hospice unit for the extraordinary way you cared for my dad. It was done with compassion, patience and respect. Finally, a special thank you to the palliative care team, Dr. Migay, Dr. Davis, and the nurse practitioner Sheri. Thank you to each and every single medical professional over the years that provided services to my dad which allowed him quality of life.

As per dad’s wishes, cremation has taken place and he will be resting at Sunset Memorial Gardens. A private family gathering will occur at a later date. If desired, donations can be made to a local animal charity, Thunder Bay Regional Health Science Centre, Heart and Stroke Foundation or a charity of your choice.

We will forever miss you but have memories to last our lifetime. We love you dad.