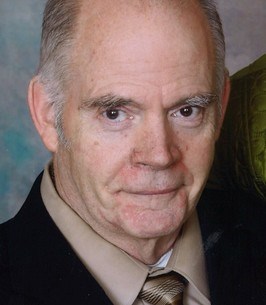 Leo's life centered on family and their happiness gave him joy. In these last years when he was sick with Parkinson, their visits and interactions with friends gave him contentment.

Leo was a Barber in Longlac for 45 years and loved the people he served and his job. He was well known for telling jokes and sharing many stories with family, friends, and customers who he knew and welcomed as friends. He was actively involved in The Parish of St. John the Baptist for many years, the Knights of Columbus and in the Parish as a Reader and Eucharistic Minister and Parish activities. In December 1985, he was president of Parish Council and these were his words for the Parish at that time: "May the blessing be that of hope for the people of Longlac, may we continue to grow, to love loyally, to do the right thing and walk humbly with our God." Micah 6:8. He was a trustee for the Geraldton Catholic District School Board for over 25 years. In these last years in Thunder Bay, he has been a member of Kitchitwa Kateri Church and although in no active ministry, he was appreciated by the community for his presence. He is a member of Christian Life Community, a lay St. Ignatius community which meets weekly. Leo liked to fish and visit friends and family. He especially liked spending time at his camp on Pagwachuan Lake and with family and friends in the area.

Leo was a kind, gentle and patient man that touched the hearts of people who knew him and cared deeply about his family, sons, daughter-in-laws and grandchildren and often ask when they were coming to visit. He would often say all you need is food in your belly, a song in your heart and love in your family to live a good life. Leo made many friends wherever he went and will be missed by all who knew him.

The family wishes to thank Wesway and ParaMed workers for their care and support.

In lieu of flowers, donations may be made to the Parkinson's Society Northwestern Ontario or the Canadian Cancer Society- Northwest Region. Arrangements entrusted to the Sargent & Son Funeral Chapel, 21 N. Court Street. On-line condolences may be made at www.sargentandson.com.