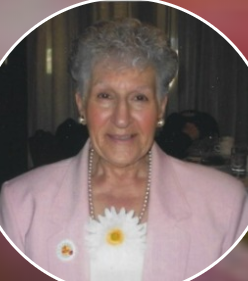 On March 16, surrounded by her immediate family who loved and admired her, moms’ body lost the fight with pneumonia. Moms’ spirit is free from pain, and she’s singing and dancing in heaven with loved ones and at peace.

Our mom was the official” hugger” at any gatherings and always had a warm smile and heartfelt hello for everyone. Moms’ kindness and compassion towards all people was her” superpower” and she never let life’s hardships and challenges overshadow her positive attitude.

Rheumatoid arthritis affected many physical activities including her beautiful singing voice, Macular Degeneration diminished her sight but that never stopped her from living life her way. Four years ago she had an accident, which resulted in a broken femur and required surgery and physiotherapy, then a wrist fracture and heart valve replacement with more therapy, but she never gave up or complained why this happened to her. With some help she lived on her own and was still very independent.

Mom loved swimming, first as a child at her grandparent’s camp on Walkers Lake in Schreiber, later at Vic Tanny’s, Robby’s, and Knights of Columbus or in a lake. She was a member of the TOPS organization for many years, and was proud to attain her KOPS status. Later on she started being a regular mall walker, walking 5 km a few days a week. Dancing, singing ,playing cards on Monday nights, Bingo on Thursday nights or potluck dinners with neighbours in her building, coffee with her good friend, Richard and on Sunday evenings, the drop in jam sessions at her cousins church where she was the greeter at the door and often sang with her sister and cousin.

A celebration of life will be announced at a later date. Donations can be made to the Arthritis Society or Charity of your Choice. We wish to acknowledge the Doctors, Nurses and support staff at the Thunder Bay Regional, most specifically Dr Kovacs and the ICU team, the Emergency trauma team and Dr Francis for moms care. A special thank you to Nurses Emily, Brooke, and student Kaitlyn. Emily you helped to make our mothers last hours with us, easier to bear. We thank you for that. Lastly, to Chaplin Michael Robinson, your words gave us comfort and closure at the end of moms’ life here on earth.