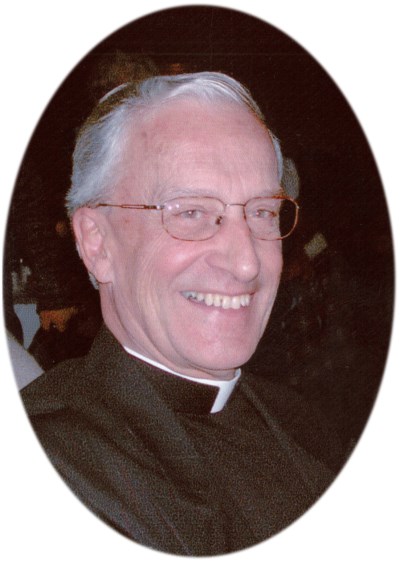 Msgr. Bourguignon was born and raised in Schreiber, attended the Schreiber Public School and later Holy Angel's Separate School, and the Schreiber Continuation School. In September 1952 he entered St. Peter's Seminary, London, Ontario. Having completed the required three year course in Philosophy and the four year course in Theology, he was ordained to the Priesthood in the Terrace Bay Recreation Centre, Terrace Bay, Ontario, on May 10, 1959, by the Most Reverend E.Q. Jennings, Bishop of Fort William (now Thunder Bay). He celebrated his First Public Mass on May 17, 1959 in Holy Angel's Church, Schreiber, Ontario. On June 13, 1959 he was assigned temporarily to St. Anthony's Parish in Port Arthur. Then on June 29, 1959 he was appointed as Curate at St. Patrick's Cathedral in Fort William where he was to remain until he was appointed first Chancellor of the Diocese of Thunder Bay on December 8, 1970. During all his years at the Cathedral he was an Instructor in Religious Knowledge at St. Patrick's High School and Chaplain to St. Stanislaus School. At the same time he instructed Catholic students at the newly founded Lakehead Teacher's College as they prepared to teach Christian Doctrine in the Catholic Separate School system. He was regularly called upon to act as pro tern Chancellor when Bishop Jennings was away from the diocese.

From 1968 until 1993 he was active in the Thunder Bay Council of Clergy and during his Presidency the decision was made to open and oversee the Emergency Shelter (now called Shelter House). Later he was elected Vice President of the Roman Catholic Directors for Ecumenism in Ontario. During all his years at the Cathedral he was also entrusted with the care of the St. Benedict's Mission Church at Moose Hill. This continued for several years after his appointment as Chancellor in spiritual and temporal matters for the Diocese of Thunder Bay.  He remained at Chancellor from December 1970 until June 1977 working under the direction of Bishop Norman Gallagher and Bishop John O'Mara. Then, beginning in June 1977 he accepted the following placements:  Our Lady of Loretto Parish, in Thunder Bay; St. Margaret Parish in Thunder Bay, July 1981; Corpus Christ Parish in Thunder Bay, January 1985; St. Elizabeth Parish in Thunder Bay, August 1986. While at St. Elizabeth Parish he had a six-month sabbatical (January till June at the Catholic University of Louvain, Leuven, Belgium.

After all these years in Thunder Bay he accepted a transfer to St. Martin of Tours Parish in Terrace Bay, Ontario in July 1993. In 1998 he accepted a transfer to St. Joseph Parish in Dryden, Ontario where he served for two years as Associate Pastor. Then in 2000 he was appointed Pastor of Immaculate Conception Parish in Ignace where he remained until May 2004. From his residence at St. Joseph's Heritage in Thunder Bay he continued to serve in parishes in the diocese of Thunder Bay. At the time of his death he had completed 60 years as a priest of the Diocese of Thunder Bay.

He was predeceased by his parents, Henri-Pierre and Yvonne (Fournier) Bourguignon, his sister Adorella (Eugene Ouellette), brothers Lionel, Patrick (Sandy McCuaig) and Albert. He is survived by numerous nieces and nephews, grand nieces and nephews. He was a member of Father Regis St. James Council of the Knights of Columbus and Chaplain to Leo Council 1130 of the Knights of Columbus. He was also a member of the Father Baxter Assembly of the Knights of Columbus.Msgr. Bourguignon was ordained on May 10, 1959, by the Most Reverend E.Q. Jennings, Bishop of Fort William (now Thunder Bay). We extend our condolences and prayers to his family and friends, and to his brother priests in the Diocese of Thunder Bay.

We pray for the repose of his soul.