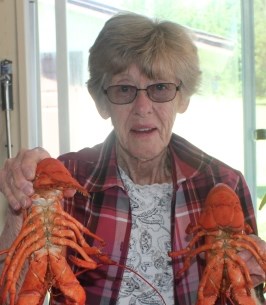 The family of Rita DeBruyne announces her death on her 86th birthday, February 5th, 2020. Rita was the beloved wife of the late George DeBruyne, mother of Debbie, Donald (Brenda), and David, and grandmother of Tessa, Tyler, Davidson and Zacchaeus. She is survived by brothers and sisters: Bertha Paulin of QC, Alma Nowlan, Theresa Jones, Emile Caissie, and Raymond Caissie of NB, and Laura Anderson and Diane Caissie of London, ON. She was predeceased by her husband George, parents Lauza (nee Larocque) and Joseph Caissie, two step-brothers, Fred and Lionel and their newborn sibling, and her sisters and brothers George, Teles, Eglantine, Betty, Sandra, and Yvette.

Rita’s feistiness was in her genes! Rita is a descendant of Marie Poirier, a French woman, and Roger Caissie, an Irishman. Roger traveled to Acadia (present-day Nova Scotia) between 1657 and 1665 hiding among the French. Roger’s grandson “Grand Jos”, fled to the forest with his family to escape the 1755-1764 Acadian deportation. On her mother’s side, Rita is a descendant of Michel Haché-Gallant and Anne-Marie Cormier, who survived the deportation by sailing across to PEI, where the remains of their farm have been archeologically discovered in Port-la-Joye, a National Historical Site. In 2017, Rita visited the site and the monument that bears the names of her ancestors.

Rita’s family eventually settled in what is now known as the Acadian Peninsula of New Brunswick. Her parents were married in 1922 in Lameque and later moved to Bathurst where Rita and her older siblings were born. Her father bought a farm in Middle River, just outside of Bathurst. Rita spoke of memories of siblings, plus grandchildren and grandparents living in the farmhouse. They were very poor but resourceful. She learned to snare rabbits, fish, cook, and during a 2016 trip to Middle River, Rita showed her granddaughter the river where she and her sisters bathed, and the rock they climbed on to avoid eels. Like many of her siblings, Rita left home at a very young age to find work, and eventually became a cook in a bush camp in Northwestern Ontario. There she met George DeBruyne, who she married in April of 1958, later settling in Port Arthur on Matthew Street where they raised their family and where Rita resided until her death. Living right around the corner, the family was very involved in St. Margaret Church. Rita was a long-time CWL member.

Rita’s main interests were her family, church, home and friends. She was a hard worker and helped her family with everything including house construction/renovation, gardening, landscaping, child-care, cat-sitting, sewing, mending, and house-sitting. She enjoyed spending time in her kitchen, cooking for her family and others, and preparing and preserving the food that George grew in the amazing family garden. The coffee pot was always on! She also enjoyed camping, fishing, and berry-picking. Before her grandchildren arrived, she volunteered cooking at the 55 Plus Centre. She loved spending time with all of her grandchildren.

After George’s passing in 2003, Rita did some serious traveling, first to Disneyland and a Caribbean cruise, two more Caribbean cruises, and a Mediterranean cruise, with add-ons of a train pilgrimage to Lourdes, a sight-seeing tour of Paris, and a car trip to Vimy Ridge. Between October 2016 and June 2017, Rita traveled twice to the East Coast, and to Gatineau where she visited siblings, nieces and nephews.

Rita died at home on her 86th birthday, February 5th, 2020, succumbing to pulmonary fibrosis and dementia.

The Funeral Mass for Rita DeBruyne will be held on Tuesday, February 11th, 2020 at St. Margaret's Church, Clayte Street, at 11:00 a.m. Interment to follow in St. Andrew's Cemetery. Visitation for family and friends will be Monday at 5:30 p.m. at the EVEREST FUNERAL CHAPEL, 299 Waverley Street at Algoma with the Rosary and Divine Mercy Chaplet at 7 p.m. and Vigil prayers at 7:30 p.m.

In lieu of flowers, donations to the Dew Drop Inn would be greatly appreciated, or ask Debbie about a project dear to Rita’s heart.