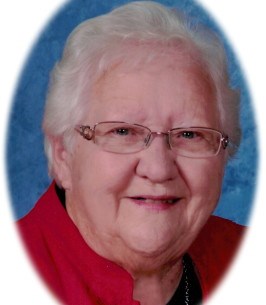 It is with great sadness that the Workman Family announces the passing of Sheila May on Tuesday, November 5, 2019. Sheila passed away surrounded by her family after a brief and courageous battle with cancer.

Sheila was born in Fort William to William and Annie Bowers on March 17, 1935. She was the youngest of 4 children and grew up on Cummings Street, attending both Franklin Street and Selkirk Vocational Schools. Upon graduation, Sheila started working for the Canadian Revenue Agency. This is where she developed a number of lifelong friendships as well as met the love of her life, Peter. Sheila and Peter were inseparable and celebrated their 49th wedding anniversary this past April. Together they raised two children, David and Megan who were the center of her universe. Sheila’s life became complete with the arrival of her grandchildren: Devin, Riley, Rhyan, Noah, Rhys and Grif. Her grandchildren will forever remember their “Nainy” for her kindness, patience and never-ending love (candy supply) and support. Sheila loved spending time with family and friends and cherished her younger years with nephews (little brothers) Michael and Peter and camping in Upsala. Later, the family camp at Silver Beach became her paradise and the place that brought everyone together. Her memory will forever live on in that special place.

Sheila had a contagious smile and opened her arms to anyone she met. She embodied community. Her friends and their families became her family. Her children’s friends became her family. There wasn’t a day that went by that you couldn’t stop at her house for a cup of tea, a chat, and a delicious baked treat.

Sheila was a lifelong member of First Church United and recently First-Wesley United. She was an active Member in the Crystal Group of the UCW and volunteered helping others in her church community.
Sheila is predeceased by her Parents William and Annie Bowers and her siblings; Sisters Doreen McNabb (Gordon), Betty McTaggart (Stewart) and Brother Bruce Bowers (Marion), Mother and Father-in-law Delmar and Catherine Workman; sister-in-law Gwyneth Workman and nephew Daniel McNabb.

Left behind to mourn her loss is her husband Peter and their children, David (Sandra) and Megan (Philip). Sheila leaves behind 6 Grandchildren; Noah, Rhys, Devin and Riley (Launa) Major, Rhyan and Grif Workman and her brother and sister-in-law Robert and Beth Workman. Sheila also leaves many nieces, nephews and their families.

A Celebration of Life will be held for Sheila, on Saturday November 9, 2019, at 11:00 am at First-Wesley United Church at 130 Brodie St. North. Arrangements have been entrusted to the WESFTORT CHAPEL, 420 West Gore Street at James.

Memorial Donations can be made in Sheila’s memory to George Jeffrey Children’s Centre or the First-Wesley Memorial Fund.

Interment for Family and Friends will be at Mountain View Cemetery at a later date.