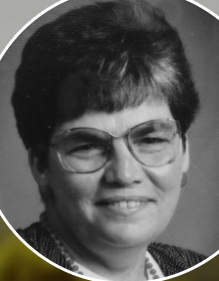 Born in Port Arthur to parents William and Orial Hickinbottom, she lived her whole life locally. She was a stay at home mother and was referred to as “Mom” by all the neighbourhood kids.

She was very gifted with sewing, quilting and knitting which she took to craft shows. She loved crosswords, puzzles and card games. She liked hockey and baseball and was a Toronto Maple Leafs and Blue jays fan.

Sherrill is survived by her husband Frank and daughter Malissa, who will miss her mother dearly. Along with sons and daughters in law Gerald, Jeff, Lauri, Terry and Michelle.
Grandchildren Ryan, Jenna, Nathan and Hope.
She is also survived by her brother Terry Hickinbottom, sisters Sheila (Bruce) Bowie, Mary Lou Irwin, Judy Huebner and many nieces and nephews. Sister in law Rose Gartrell.

Sherrill is predeceased by her mother Orial and father William, in laws Ethel and Tony Delmo. Sisters Hillary (Nick) Prentovich, Carol (Pat) Hill, brothers in law Richard Irwin, Art Huebner, Frank Gartrell, George Delmo. Aunts Betty Hayes and Vanira MacArthur.
We were all blessed to have Sherrill in our lives. She was a very caring and compassionate person.

Thank you to all the doctors, nurses and staff who have cared for her over the years.
Thank you to Karen and Katherine who have been there for Sherrill.
Over the past 7 years, Sherrill was cared for in St Joseph’s Hospital, Chartwell Arundle Street and Southbridge Vickers Street.
In respect to Sherrill’s wishes there will be no service. Cremation has taken place and interment will be at a later date.

In lieu of flowers, donation may be made to the Heart and Stroke Foundation, Sick Kids Hospital Toronto, or the Canadian Cancer Society.