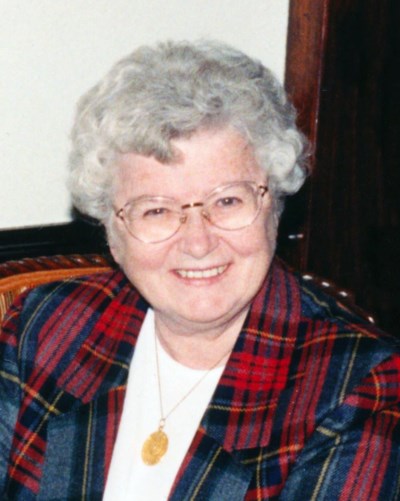 Sister Shirley Grexton
(Sister M. Germaine)
November 8, 1934 – June 21, 2020
It is with sadness that The Sisters of St. Joseph of Sault Ste. Marie announce the death of Sister Shirley Grexton  (Sister M. Germaine), on Sunday, June 21, 2020 at St. Joseph’s Motherhouse, North Bay, Ontario.
Sister Shirley was the youngest of three children, she proudly shared her birth year with her sister Joyce.
She is predeceased by her mother Victorine (Dennie), father Earle and brother Gerald. She is survived by her sister Joyce Bentley, (Darcy Bentley), loving nieces, nephews, grandnieces and grandnephews.
Sister Shirley entered the congregation of The Sisters of St. Joseph of Sault Ste. Marie, September 2, 1957, she received the name Sister M. Germaine.  Shirley, a trained teacher, taught in Spanish and New Liskeard before entering the congregation.
After joining the community Sister Shirley taught and served as principal for the next thirty four years in the elementary panel in North Bay, Schreiber, Sudbury, Sault Ste. Marie, Port Arthur and Fort William (Thunder Bay).  During this time she completed her Master’s in Education from University of Ottawa.
Following a sabbatical year, Shirley enrolled in Canon Law studies at Ottawa, University, earning a Master’s in Canon Law in 1992.
This second phase of professional life brought Shirley to Thunder Bay where she was named the Director of the Diocesan Marriage Tribunal office.  She was named Chancellor of the Diocese of Thunder Bay in 2000, a position she served in until retirement in 2009.  She returned to Sudbury in 2012 and was named the Administrator of St. Joseph’s Residence.  She retired to St. Joseph’s Motherhouse in 2017.
Sister Shirley, a woman of deep faith, is remembered for her gracious hospitality.  She was a superb cook, gardener and hostess.
During these unprecedented times, it is with regret that the Sisters of St. Joseph will not have a public funeral liturgy.  A private service will be held and a celebration of Sister Shirley’s life will be scheduled at the Motherhouse at a later date.
In lieu of flowers, donations to the works and ministries of the Sisters of St. Joseph of Sault Ste. Marie would be appreciated.  Online condolences can be made at www.hillsidefuneral.ca
Sister Shirley Rest In Peace