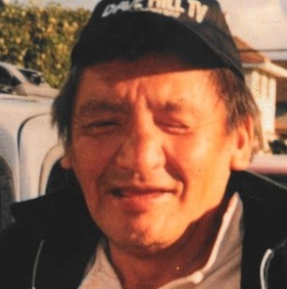 Dad was born in unknown territory, which became an accurate depiction of his life. Tommy was a man on the move starting at a young age with his father, Marcel. Unfortunately, early into his life he was taken to residential school until he was a young man at the age of 13. After surviving residential school, Tommy started his long road to recover, that became his life. After years of wandering and trying many different jobs, he settled in Collins. The rough and rowdy Tommy Quisses quickly earned his title as “the Beast”. In Namay, he met his “beauty”, Helen Paavola. Adventures with Helen, lead to 6 beautiful daughters. During the younger years, memories of exploring, camping and hunting are fondly remembered amongst his children.

It is during this time he started a lifelong friendship with Tom Wastaken, they were the best of buddies, and they were brothers of the heart. The Beast never let a challenge float by and always convinced Tom W to shoot the rapids. Their hooting, hollering and laughter could be heard from miles away. With his daughters growing up quickly, Tommy was blessed to have grandchildren and great grandchildren whom he loved with a great passion. His grandchildren now number to 17 and 14 great grandchildren.

Tom was a force of nature. Determined to live life on his terms and that is what he did. His family was his world. His grandchildren and great grandchildren brought him unmeasurable joy. Tom was proud of his daughters and with each one he had a unique relationship. He also developed loving and respectful relationships with his son in laws. He loved and accepted them as his sons. Throughout the years he would enjoy outings with his son in laws, such as fishing, which lead to evenings sitting around a open pit fire filled with laughter.

Although he was rough around the edges, he was a kind hearted and well-respected leader, and elder in his community. Tom had a love for his community and only wished good things for it and its people.

Predeceased by his parents Marcel and Louise, daughter Karen, grandchildren Devin and Charlie.

A Funeral Service for Tommy will be held on Thursday, February 13, 2020 at 11 a.m. in the Chapel of Harbourview Funeral Centre. Visitation will begin one hour prior to the service.