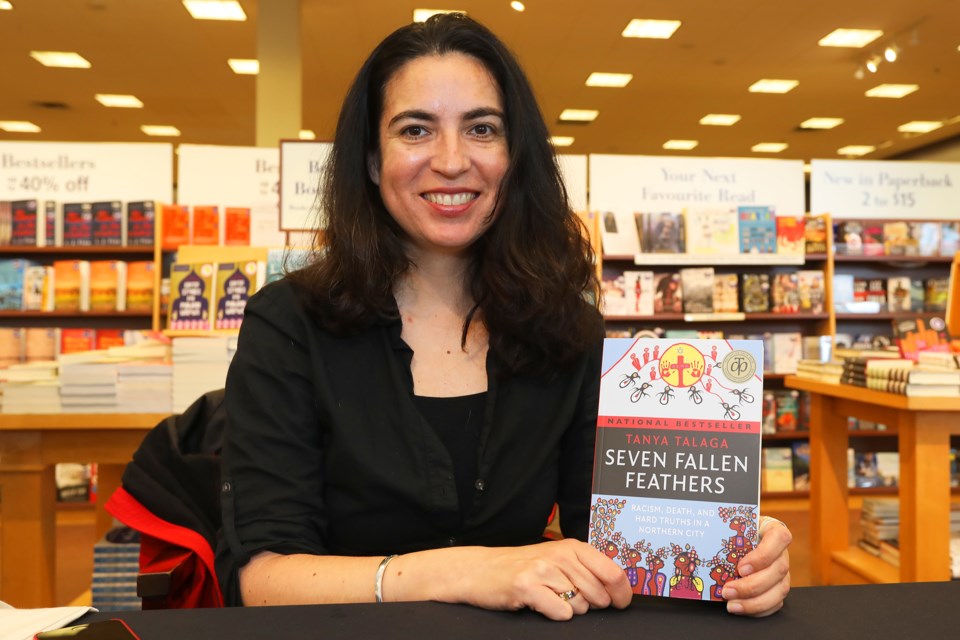 Anishinaabe author Tanya Talaga was on hand at Chapters in Barrie to sign copies of her bestselling book Seven Fallen Feathers on Saturday, June 23, 2018. Kevin Lamb for BarrieToday.

Discovering and educating ourselves on the Indigenous community of Thunder Bay and Canada has become a bigger part of our everyday lives.

With books discussing Indigenous youth in Thunder Bay and why they’re disappearing so far from home, or fiction that tells stories of survival and community, this is literature that’s important to our discovery and understanding of a community so pertinent to the foundation and success of Thunder Bay.

The stories differ but the main point of education through storytelling shines through all of these works by authors either from Northern Ontario or telling stories of our region and community that has deep roots in this land.

Norval Morrisseau was from the Bingwi Neyaashi Anishinaabek First Nation off the east shores of Lake Nipigon. He was an artist known as the “Picasso of the North” and depicted legends and culture through his works.

His style was characterized by bright colours with thick, black outlines. The author details the artists controversial and tragic life of art and self-destruction. An Ojibway himself, Ruffo takes his own experiences as a way to give a perspective on Morrisseau’s life.

Adler is a member of the Lac Des Mille Lacs First Nation and in this work of fictional horror, Wrist tells the story of a boy named Church in Northern Ontario and his partner in crime, a knife, named Religion.

Church is told that he’s a descendent of the Wiindigo, a monster that eats human flesh. The author was influenced by a Norval Morrisseau painting of this monster, as well as Francisco Goya’s painting of Saturn Devouring His Son.

The story unearths monsters and Adler uses this as a metaphor for observations Church makes about the modern world and how colonization leaves the Indigenous community in a constant state of fear and loneliness.

Hunter is an Anishinaabe poet and former chief of Rainy River First Nations that has compiled poetry that intertwines with the sensual and irreverent feelings one has while experiencing the feelings of love and loss.

As a difficult insight into the systems and institutions that continue to harm the Indigenous community in Canada, Tanya Talaga dives into the local Thunder Bay community and what’s behind the death of seven Indigenous students.

A Two-Spirit Journey: The Autobiography of a Lesbian Ojibwa-Cree Elder

As a native to the remote parts of Northern Ontario, Chacaby moved to Thunder Bay in her 20s. In her autobiography she details her personal struggles and has written a memoir that is educational and crucial to the understanding of issues the Indigenous community faces.

The title, Two-Spirit, means Chacaby carries a male and female spirit inside. She knew this to be true when she came out over 30 years ago and received backlash from her community. She led the first Pride parade in Thunder Bay in 2013.

Youth immersed in water conservation journey across the north shore (9 photos)
Sep 10, 2020 10:08 AM
Comments
We welcome your feedback and encourage you to share your thoughts. We ask that you be respectful of others and their points of view, refrain from personal attacks and stay on topic. To learn about our commenting policies and how we moderate, please read our Community Guidelines.