A Lakehead University student's passion for geology has landed her a $2,000 Northwestern Ontario Mining Scholarship.
Mar 18, 2021 2:40 PM By: Katelin Hogard 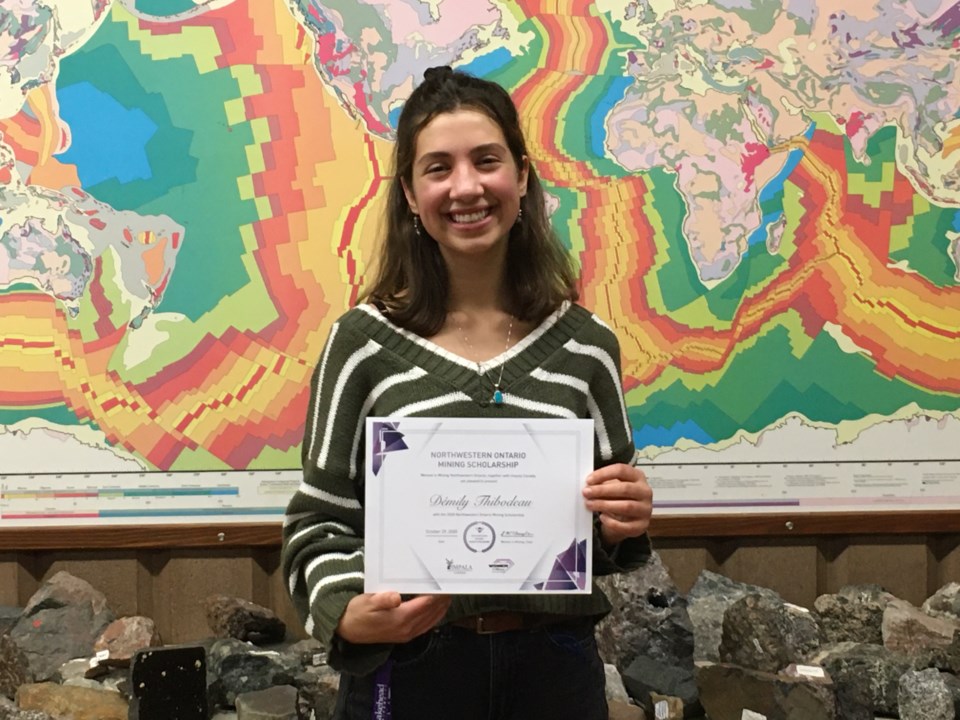 Demily Thibodeau has a bright future ahead of her. As a first-year geology major at Lakehead University, she’s following close in her father’s footsteps, a prospector in Wawa, ON.

“I always knew I was passionate about geology,” she says.

As the 2020/2021 school year began, Thibodeau had the choice to stay close to Wawa and learn remotely, but instead came to Thunder Bay, lived in residence, and began her post-secondary career with a strong footing.

“[The geology department] got permission to have a few students come in and participate in labs in the fall and Demily took advantage of that. She came in to identify rock and mineral samples in person and I thought that’s real dedication,” says Mary Louise Hill, one of Thibodeau’s professors.

Hill has educated a generation of geologists and geoscientists and was a founding director of the Northwestern Ontario branch of Women in Mining.

Holding a HBSc degree from Carlton University and a PhD in geology from Princeton University, she knows a star pupil when she sees one.

“[Demily] is showing the dedication it takes [because] it’s not easy finding a mineral deposit. You can’t be a quitter. You need to be really optimistic and positive and keep on going and Demily has demonstrated that,” Hill says.

Hill says she remembers the day she decided to be a geologist and she’s never regretted that decision.

While geology may not be the first career women look to as a welcoming sector, Thibodeau and Hill couldn’t be more optimistic.

A geologist and a geoscientist is a prominent position for a woman and it is more inclusive than ever.

“A lot of mines around Northwestern Ontario want women in the mines and they want to recruit women specifically because they know that they succeed in the field itself,” Thibodeau says, excited about the future of mining.

Hill discusses the changes of the industry since her own undergraduate career and says it has shifted into a more welcoming and diverse sector. What was once thought of as a boy’s only club is now a place driven by women and diversity.

“The more diversity you have on a team, the more ways you have of looking at the same problems and the more you’ll discover,” Hill says.

Thibodeau beams when discussing her future and the future of geology. Growing up on the shores of Lake Superior, she’s excited to travel the world with her degree and to build a career in Northwestern Ontario.

She wants to work in mines around Ontario and would like to focus on sustainable mining on Lake Superior.

“The environment is really important to me and I want to make sure we are doing geology in a sustainable way to support climate change and environmental issues,” she says.

Hill shares this excitement and knows Thibodeau will make a wonderful geoscientist that will explore, discover and bring prosperity to Northwestern Ontario.

This story was made possible by our Community Leaders Program partner.