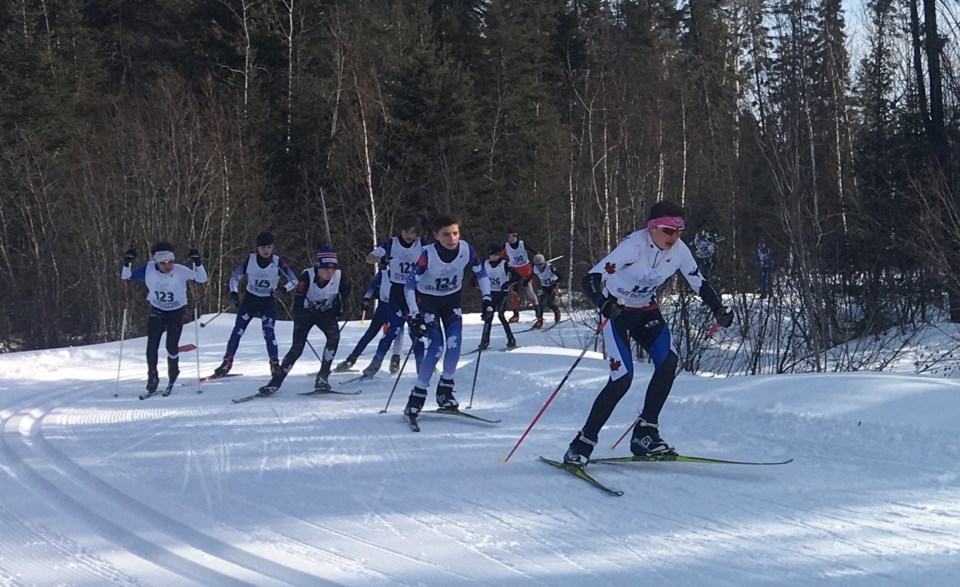 Willem van Duyn leading the pack with Cedric Martel and Sebastien Doucet hot on his heels. (Photo by Stephanie Marler)

THUNDER BAY -- Twenty-six of Thunder Bay’s U8 to U14 cross country skiers from Big Thunder and Lappe Nordic, as well as 19 ski clubs from across the province, travelled to Timmins this weekend for the 2020 Ontario Youth Championships. After challenging conditions for some of these athletes at the Ontario Winter Games last week, they enjoyed perfect “Thunder Bay” like trail conditions with excellent grooming by the local organizing team. Both ski clubs came home with an armload of medals as well as two coveted technique awards won by 9-year-old Jack Nyitrai and 9-year-old Max Sarrazin.

Lappe Nordic and Big Thunder dominated the competitive field of athletes with podium finishes in several age categories on both days. The 2006 boys swept the podium in both Saturday and Sunday’s 4 kilometres races with Sebastien Doucet winning gold on Saturday in the Interval Start Classic race, followed by Willem van Duyn and Cedric Martel with silver and bronze, respectively. On Sunday, it was Willem van Duyn’s turn for gold in the Mass Start Skate technique race, with Cedric Martel in silver, and Sebastien Doucet with bronze.

The Puiras girls, Maaritta, Emmi and Kirsti, all podiumed on both days, with Maaritta earning silver on Saturday and bronze on Sunday, Emmi with gold and bronze, Kirsti with gold and silver. 8 year-old Caed Hakanen won the bronze medal in his category.

The 2007 girls had a strong podium presence with Charlotte Ailey winning gold on Saturday, followed by Sarah Kiiskila in silver. Sarah Kiiskila then won gold on Sunday with Min Dobson in 3rd place.

Our final podiums were clinched in the boys’ 2007 category with silver by Willem Abbink in Saturday’s race and by Mikkai Jones and Willem Abbink, in silver and bronze, respectively, in Sunday’s race.