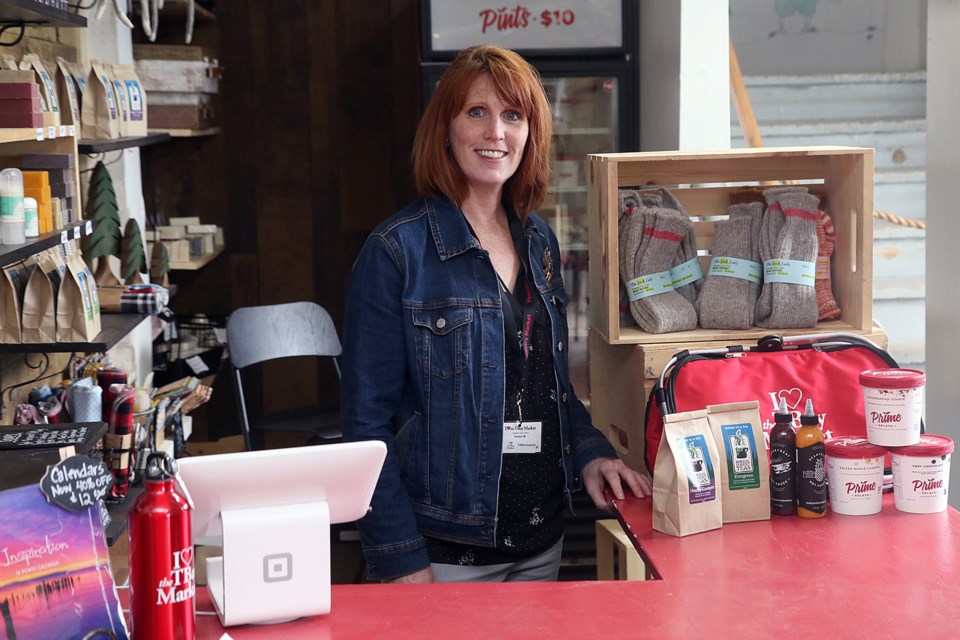 Thunder Bay Country Market board president Kelly Fettes preparing to welcome customers back to the market in May. (Leith Dunick, tbnewswatch.com/FILE)

THUNDER BAY – Emerging from the most difficult summer in its 25-year history, organizers with the Thunder Bay’s Country Market say the experience – while undeniably challenging – demonstrated the institution’s surprising resilience.

They credit remarkable support from customers and a spirit of collaboration amongst vendors for seeing the market, which offers products from local farmers and artisans, through unprecedented times.

Henriet DeBruin, a co-owner of DeBruin’s Greenhouses who helped found the market and sits on its board, recalls the early, harrowing days of the pandemic, which forced the market’s closure in March.

Along with the shuttering of restaurants, it left her family’s hydroponic farm with few sales outlets just as production was beginning.

“It was a bit of a ride – you go from thinking, this is going to be a great year to, oh my goodness, we have nothing,” she recalled.

Now, approaching the end of their growing season in November, DeBruin reports the farm is roughly on track for an average sales year – a remarkable turnaround.

The market had wasted little time in adjusting to the shutdown, creating a new online store within weeks. A brief attempt to reopen physically at its location on the CLE grounds in late March proved unsuccessful – there wasn’t enough traffic to justify opening – but online sales helped bolster many producers.

The early success of the online store was impressive, DeBruin said. Customers would call asking how they could continue accessing their products, wanting to support local producers.

“We sold half of our crop in half an hour online,” she said – something that normally takes a full market day. “It was really overwhelming to hear the support from the local customers… that was very moving.”

The Saturday market reopened to the public in late May. Customers at first came back in a trickle that grew steadily through the summer.

Sales at the online store, which reached around 200 orders per pickup at their peak, declined as in-person traffic picked up, leading the market to suspend it in August, instead reopening on Wednesdays evenings.

While the online store came with its share of challenges – without fridges or freezers of its own, the market had to use those of vendors to store orders, for example – market manager Annet Maurer called it a positive experience.

“We did get feedback that a lot of people found products online that they didn’t even know we had,” she said. “So they tried them for the first time, and now it’s one of their regular items.”

Given the uncertainty around the pandemic, it was also a reassuring proof of concept for a solution that could be needed again in the future.

“If there is a next wave, because our processes are in place, we’ll still be able to get that product to the customer,” DeBruin said.

While the market doesn’t track vendor sales, Maurer and Kelly Fettes, the president of its board of directors, estimated the average vendor had seen about a 25 per cent drop in sales for the year.

“In some instances it’s slightly more, and in others it’s a lot less,” reported Fettes. “That really depends on their products and how they run their business. A lot of them have gone, I can’t have all my eggs in the market basket, so they’ve diversified.”

Maurer estimated traffic at the market had been between 50 and 75 per cent of normal levels.

Only one of the roughly 100 affiliated producers had gone out of business during the pandemic, they said, though others had temporarily stepped away from the market.

Many still offered their products through the market store, which sells items on behalf of producers who aren’t physically present.

Fettes praised market staff and vendors for keeping up with the constant adjustments necessary to guide it through the pandemic, including four separate revamps of the downstairs layout to improve physical distancing.

“It’s almost like raising a child,” Fettes said. “Keeping this business viable took a lot of people, and a lot of ideas.”

The Country Market operates out of the Dove Building on the CLE grounds Saturdays from 8 a.m. to 1 p.m. and Wednesdays from 3:30 to 6:30 p.m.

“We can’t wait anymore”: 2020 a tiring year for autism families
Sep 11, 2020 9:17 AM
Comments
We welcome your feedback and encourage you to share your thoughts. We ask that you be respectful of others and their points of view, refrain from personal attacks and stay on topic. To learn about our commenting policies and how we moderate, please read our Community Guidelines.