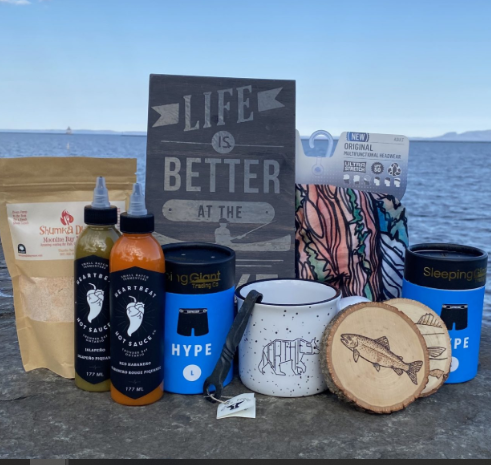 One of the packages offered through Dad's Big Sack. (Submitted photo)

THUNDER BAY – While COVID-19 has brought its share of economic gloom, three Thunder Bay entrepreneurs are marking a success story.

Thomas Veneruz, Mitchell Pynn and Marco Lombardo launched Dad’s Big Sack in the spring, offering gift packages made up of products from 17 local businesses available through their website.

The group counts the more than 160 bags sold in the lead-up to Father’s Day a success, and are continuing the project, eyeing future holidays like Christmas, Valentine’s Day, and Mother’s Day.

Father’s Day sales generated more than $17,000 for local suppliers, while the company donated a $550 share of its profits to the United Way’s COVID-19 Community Response Fund.

Especially for some of the smaller local suppliers, the sales had a real impact, Veneruz reported.

“It definitely exceeded what our expectations were,” he said. “It was a big deal for some of our vendors – some were working around the clock to fill the orders.”

The trio behind the project were all born and raised in Thunder Bay. Two are business graduates, while another is a computer science grad (two from Lakehead University). The combination of backgrounds worked well to support the e-commerce project, Veneruz said.

The group is taking its future plans one step at a time, but their recent move to offer shipping across Canada signals their ambitions to expand the business.

Veneruz believes there could be interest from former Thunder Bay residents now living elsewhere in the country, having already received requests from as far afield as New Jersey and the UK.

One thing that won’t change is the group’s commitment to supporting local businesses, who Veneruz praised for their cooperative, community-minded approach.