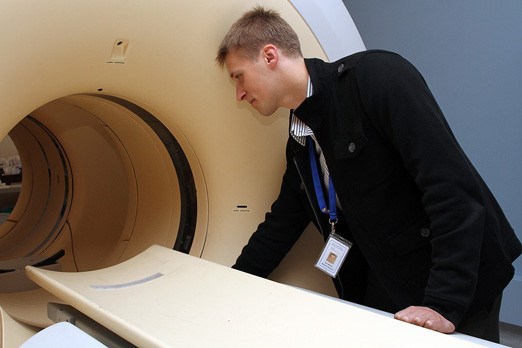 Oleksandr Bubon is the recipient of an Ontario Brain Institute Entrepreneurial grant in the amount of $50,000, money that will allow him to attempt to market a mobile PET scan device he's invented at the Thunder Bay Regional Health Sciences Centre. (Leith Dunick, tbnewswatch.com)

On Friday he got a $50,000 boost from the Ontario Brain Institute, money he’ll use to learn how to network with investors as he continues to develop and ultimately market the technology being produced at the Thunder Bay Regional Research Institute.

The Ukrainian, a physicist who graduated from Lakehead University before moving on to TBRRI, said it’s often easier for scientists to develop the technology than to convince others to spend money to back it.

Learning about entrepreneurship, combined with his research skills, will hopefully allow the budding scientist to go into business for himself.

“Just because I know how to develop something doesn’t mean I can get money out of it. So I think this will be the first priority, and then get closer to the point where we can actually establish a company at the Thunder Bay Regional Research Institute.”

The end result could be life-changing for people without easy access to PET scan technology, which is why he plans to spend the next year learning about commercialization opportunities.

His work will make the devices, which use tracers to create three-dimensional images of the human body, smaller and portable.

“It will allow the medical community have better diagnostic equipment for cancer diseases or for Alzheimers,” he said.

“This will be a portable device that can be moved around from the office … it can be placed in a small car and one (technician) can come and make a scan at your home, which is very important for Alzheimer’s patients.”

TBRRI chief executive officer Michael Wood said the grant fits in well with what the centre is trying to accomplish in the city, monetizing ideas and turning them into profitable ventures.

“It will stack the odds in his favour to get a small company out of here in Thunder Bay. It’s part of our strategic plan, one of several ventures that we are incubating that we dream will become a company here in Thunder Bay, eventually,” Wood said.

Wood said as quickly as five years from now he’s hoping to see as many as five start-ups on the go in Thunder Bay, a number he’d like to see grow to a dozen or more spin-offs emerging as a direct result of the research that started the institute in the first place.
Scientists today are much better networkers than they once were, as everything in the industry evolves from collaboration.

“But this is taking it to another level, and for this enterprise to really go anywhere, it’s going to involve partners at so many different levels – people to bring a piece of this technology that’s missing, people to bring the distribution channel and funding,” Wood said.

“Partnerships are going to be critical for this venture to become reality.”