The annual New Year’s Day levee has become a military tradition in Thunder Bay.
Jan 1, 2014 11:44 AM By: Leith Dunick 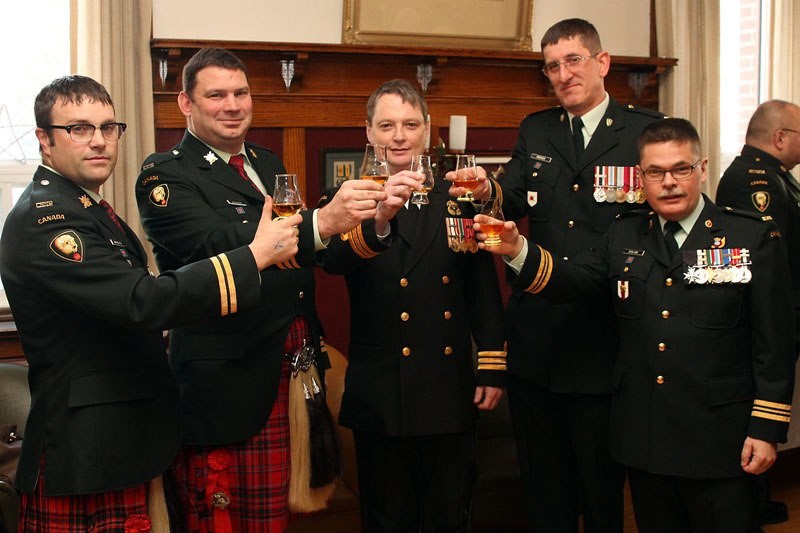 It’s a chance for the region’s armed forces to open their doors and make a connection with the community, said Lake Superior Scottish Regiment commanding officer Lieut. Col. Geoff Abthorpe, an Afghanistan veteran who helped host the Wednesday morning affair at the O’Kelly Armoury, raising a glass in salute to Queen Elizabeth II.

“The reason we have this is for us to come together on the new year to reaffirm our allegiance to the Queen,” Abthorpe said.

“Many of us in the room hold a queen’s commission and we owe it to ourselves toast her on this momentous occasion. More importantly, it’s a chance for us to open our doors to the public and to local businessmen, to welcome them in, invite them over for breakfast and partake in some of our stories that we’ve had over the last year.”

The levee tradition dates back to Canada’s distant past, more than two centuries before confederation.

First begun in 1646, the original level was held to pay respects to Charles Hualt de Montmagny, the governor of New France.

De Montmagny received visitors at the Chateau St. Louis, where he shook hands and shared updates on significant affairs within the colony, which would later become the Canadian province of Quebec.

In addition to the LSSR, Thursday’s celebration was co-hosted by 18 Service Company, 18 Field Ambulance and 3 Squadrom/38 Signals Regiment.

Later in the day HMCS Griffon takes on the role of host, with a levee of its own.

Cmdr. Peter Fleming, who attended the morning celebration, said the levees are all about comradeship.

“Here in the military community of Thunder Bay we’re a tight-knit, close community comprising of five units. All of our retired members, our active members and their families like to get together on New Year’s Day to have a toast to the Queen and just get together and start the new year off together and exchange ideas on the future,” Fleming said.

One of the more important aspects of militias and naval reserve units in Canada is the ability to connect with the Thunder Bay community at large.

It’s a chance to let Canadians know what the military is all about, Fleming said.

“We are part-time workers that come from various jobs throughout the city and it’s important for people to know that we wear two uniforms, one at civilian work, one at military work,” he said.

“Here’s an opportunity for people who walk by this building a number of times and may not have come in, (for us) to welcome them in, offer them a drink and share a story with them and to connect with them, to let them know we’re not that faceless bureaucratic military.”