AODA review hopes to address what it means to be accessible

Former Ontario lieutenant governor is conducting the third legislative review of the Accessibility for Ontarians with Disabilities Act.
Oct 31, 2018 5:15 PM By: Matt Vis 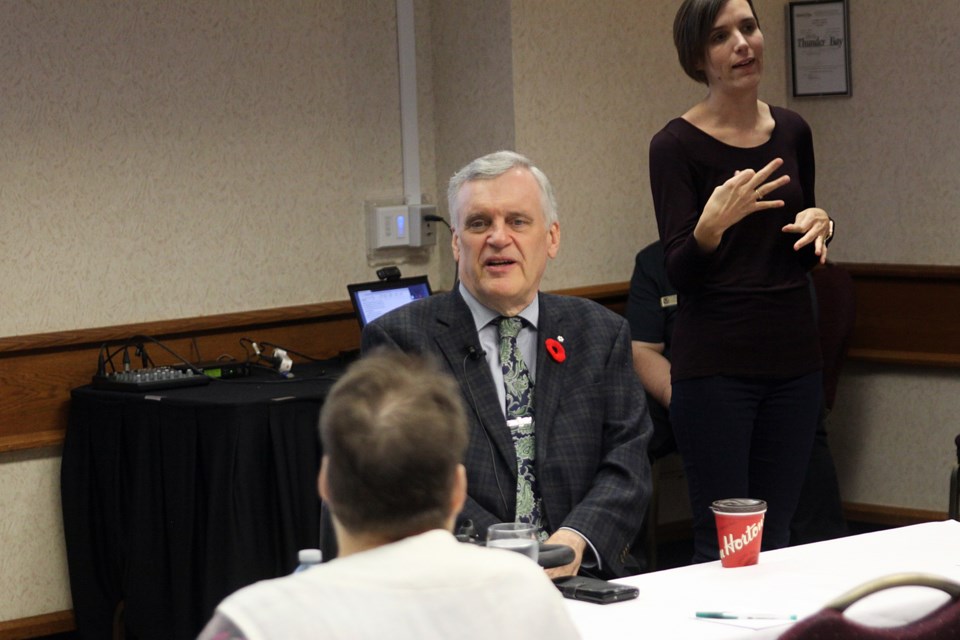 THUNDER BAY – The Accessibility for Ontarians with Disabilities Act, passed in 2005, gave the province 20 years to become fully accessible.

With that target date now less than a decade away, David Onley believes it’s important to figure out what exactly it means to be accessible.

The former Ontario lieutenant governor is in the midst of conducting the third legislative review of the act, a process that brought him to Thunder Bay for a Tuesday afternoon public town hall session.

“If you can’t identify what the objective is, how are you going to know whether or not you get there,” Onley said.

“I think there needs to be some definition setting as to what it is that we’re really talking about what we’re going to do.”

Onley compared the lack of direction with the act to former U.S. president John F. Kennedy’s famous declaration in 1961 that the country would land a man on the moon by the end of that decade and return him home safely.

“The equivalent of the AODA would be that we need to go somewhere in space sometime fairly soon and do our very best to get back OK,” Onley said. “It’s not definite.”

Maurice Rubenick, who has required a wheelchair since breaking his back in a fall on the job in 1988, said one emerging issue he has encountered is that the act does not have regulations for bed heights in accessible hotel rooms.

Beds 30 inches in height, which Rubenick said is becoming more common, are difficult for people with physical disabilities to climb in and out. He has been told to discuss the issue directly with hoteliers.

“What purpose is the AODA if I have to do the talking myself? It doesn’t make any sense,” Rubenick said. “An accessible hotel room gives you all accommodations for wheelchairs, heights of toilets, heights of showers, wheel-in showers, chairs, but nothing to do with bed height.”

Onley, who uses a motorized scooter and leg braces after an early life battle with polio, said he is finding a similar trend when he travels.

That is an example of an issue, Onley said, that exists all across Ontario rather than just in small, isolated pockets.

“If you keep hearing the same thing then you go, OK, this is happening across the province. It’s not just a big city problem and it’s not just a small town problem.”

Other examples raised include businesses that have accessible washrooms but have physical barriers, such as steps, to enter the building.

The act in 2005 required municipalities with a population of more than 10,000 people to have municipal accessibility advisory committees.

Onley said he has heard across the province that members of those committees don’t feel like they’re listened to or paid attention, which is something he said should be assessed.