Boots on the Ground provides support to first responders

Non-profit organization operates a 24/7 hotline for police officers, firefighters, paramedics and corrections officers, who often see the worst humanity has to offer on a day-to-day basis.
0
Jan 15, 2020 2:52 PM By: Leith Dunick 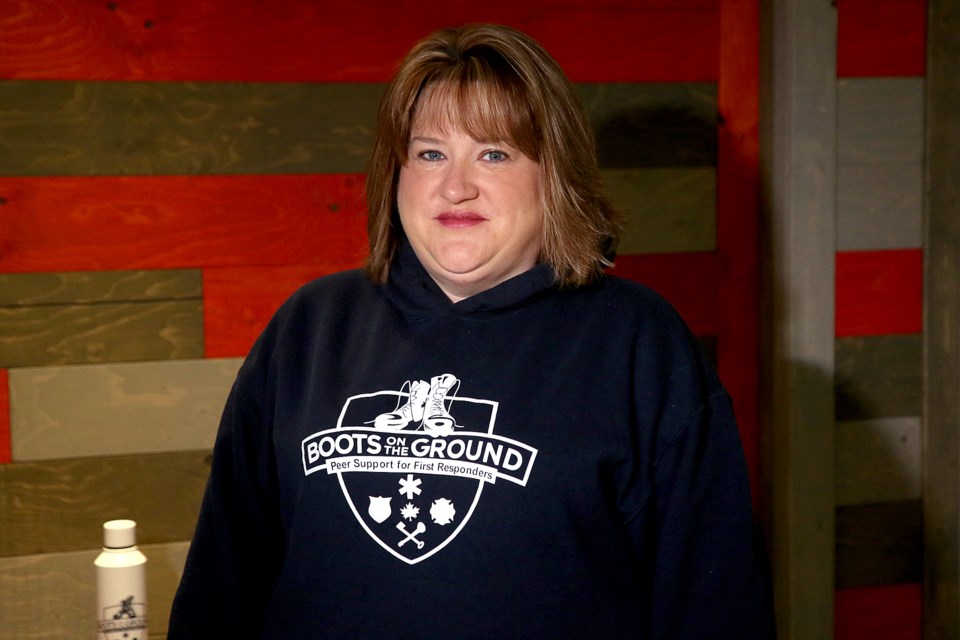 Sharon Bak is the northern operations manager for Boots on the Ground. (Leith Dunick, tbnewswatch.com)

THUNDER BAY – Sharon Bak says there’s a misconception that first responders are super heroes, that nothing fazes them.

Unfortunately, nothing could be further from the case.

Police officers, firefighters, paramedics and corrections officers can’t simply turn off what they see on a daily basis, whether it’s a bloody murder scene, a burn victim or the aftermath of a deadly collision on a Northern Ontario highway.

Over time, it can have an effect on their mental well-being.

That’s where Boots on the Ground steps in.

Started in southern Ontario by retiring police officer Dave McLennan, the volunteer non-profit organization has built a network of peer support, largely comprised of retired emergency service professionals, who provide a 24/7 hotline for first responders to deal with their own inner trauma.

Currently there are six volunteers stationed in Northern Ontario.

Bak, a former volunteer medical first responder with the Pass Lake Fire Department, said it’s a service that’s been well put to use since it formed in 2018, with more than 300 calls taken province-wide.

“I know first-hand what’s seen. It’s not pretty. It’s ugly and it’s cumulative oftentimes. They’re seeing things over and over and over that are really the worst of humanity,” Bak said. “We expect sometimes our first responders to be super heroes and they’re not superheroes.

“They’re human beings and this does take a toll on them, and not just them, but their families and friends who are around them.”

Bak pointed to a recent spate of events in Thunder Bay, including two murders in the first two weeks of the year and a deadly transport crash on Highway 11/17 that killed three people.

“Those responders are hurting and what we want to do is make sure there is an opportunity to talk to peers. Peer-to-peer support is a proven model of support for folks,” Bak said.

“Just talking is important. We know a lot of these responder groups have great internal peer support groups as well, and we love that. This is just another capacity building piece, where if somebody wants to talk externally, outside of the workplace, that they can do so.”

Volunteers on the other end of the line are restricted to current and former first responders, who have gone through similar experiences.

They’ve received extensive peer support and suicide prevention training, which also allows them to know when it’s time to reach out to a professional for help, especially when a first responder might be contemplating self-harm because of what they’ve seen on the job.

Bak said Boots on the Ground has been well-received in Northern Ontario, adding she’s hoping to train another four volunteers from the region to up their complement and expand their ability to serve.