Union members have been without a contract for nearly four years, seeking higher wages and right to retire after 25 years without penalty.
Feb 12, 2018 2:12 PM By: Leith Dunick 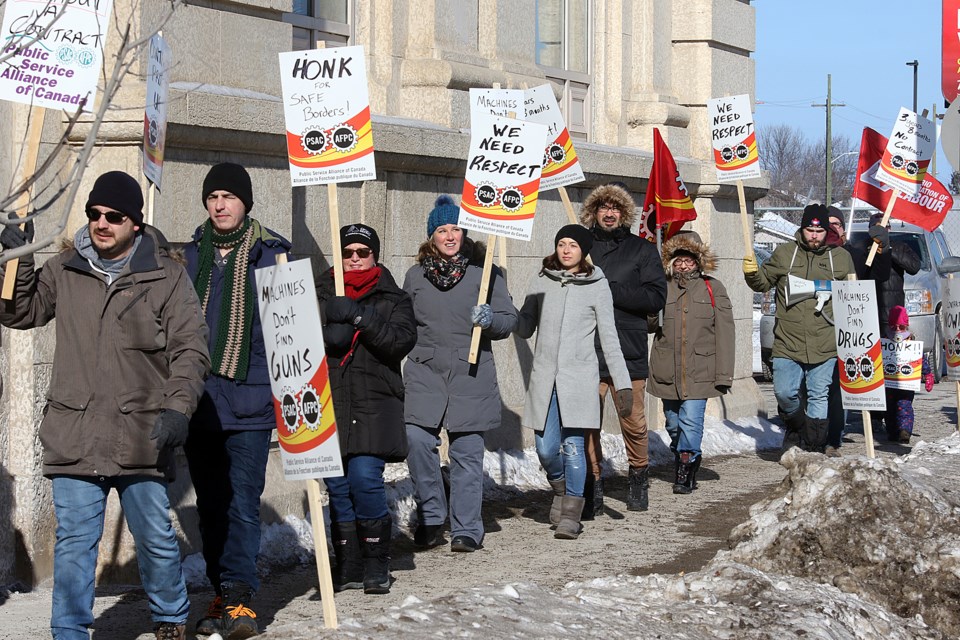 Workers with the Customs and Immigration Union march in front of the Canada Border Service Agency offices on May Street in Thunder Bay on Monday, Feb. 12, 2018. (Leith Dunick, tbnewswatch.com).

THUNDER BAY – Canada Border Services Agency officers have been without a contract for nearly four years and are unhappy with the situation.

On Monday about a dozen workers from the Customs and Immigration Union, a division of the Public Service Alliance of Canada, held a lunch-hour march in front of CBSA’s offices on May Street, demanding the agency get a contract done.

“Fair contract now!” marchers shouted, passersby honking their horns in a show of support as the group circled the sidewalk, with temperatures outside dipping below -15 C.

“We’re three years, eight months without a contract and it’s completely unacceptable. Our employer does not recognize the work we do as law enforcement. We’re asking for them to take that seriously at the bargaining table and so far they have not,” Wiersema said.

There are several issues at stake, including wage parity with other law enforcement agents such as the RCMP, and the right to retire after 25 years without penalty to their pension.

“It’s not an extra entitlement,” Wiersema said of the pension request.

Agents are also concerned with a rapid move toward automation at the country’s borders and, in particular, at ports of entry like airports. They're also looking for scheduling flexibility.

“What that is resulting in is the reduction of staff,” he said. “Staff is shrinking in the agency and they keep rolling out these technologies that they don’t even have to pay for. We want that to be limited because it’s officers and it’s dedicated professionals that have the training that keep people safe, not machines.”

Wiersema said workers are waiting for the Public Interest Commission to make a ruling, a non-binding arbitration process they’re hoping will hasten the two sides to the table.

“It’s going to come back with recommendations, of what we’re asking for and whether it’s fair or not,” he said. “But it’s not binding, so we will try to bargain again. What we want the employer to do is come to the table seriously and meet some of our demands. Let’s talk about them.”

CBSA employees won back the right to strike under the current Liberal government, and while workers see it as a last-ditch option, it remains a possibility.

“We are an essential service and there’s a percentage of us that will be essential. In a strike position, if we get to that point, we would never put Canadians at risk. Their safety is paramount … However some non-essential things would have to go, like duties and taxes. We wouldn’t be collecting them,” Wiersema said.