Brayden Bushby was found guilty of manslaughter for his role in the 2017 death of Barbara Kentner, who was struck by a metal trailer hitch thrown from a moving vehicle by Bushby
Jun 7, 2021 11:41 AM By: Doug Diaczuk 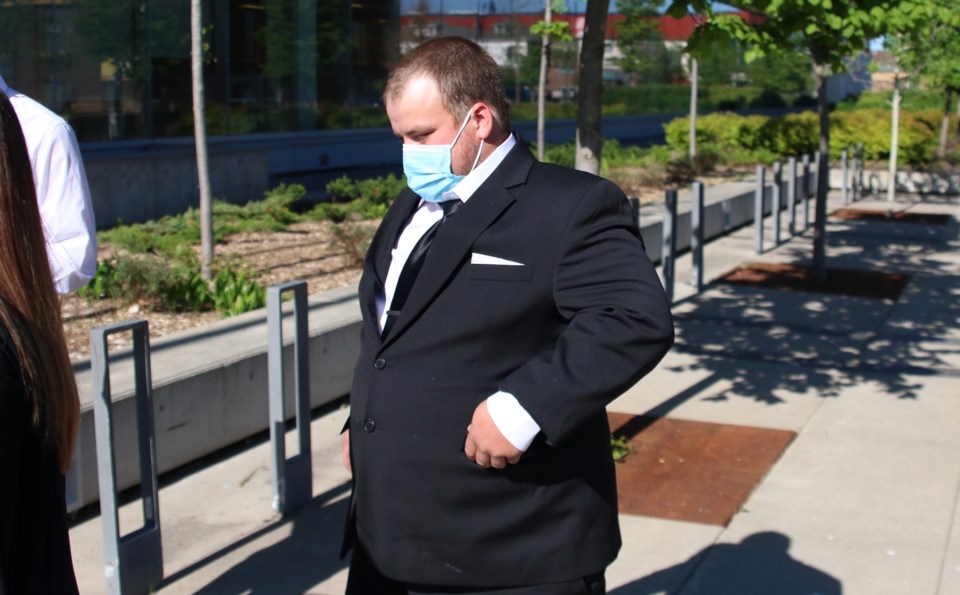 THUNDER BAY - After nearly four-and-half years since 34-year-old Barbara Kentner of Wabigoon Lake Ojibway First Nation was struck in the abdomen with a metal trailer hitch thrown from a moving vehicle, which ultimately led to her death, Brayden Bushby, the one responsible, will spend the next seven years and 11 months in a federal penitentiary.

Justice Helen Pierce handed down her sentence in a Thunder Bay Courtroom on Monday where Bushby, who has been out on bail since November 2017, was led away in handcuffs.

“We all have an interest in this sentence and the message it sends,” Justice Pierce said. “There will be some who think this sentence is not harsh enough while others will think it is too harsh.”

“What you did Mr. Bushby was not brave. It was not manly. It was not impressive. It did not make our community a better place.”

Bushby, now 22, was found guilty of manslaughter following a four-day trial last December. Before the trial, Bushby pleaded guilty to aggravated assault, not denying that he was the one who threw the metal trailer hitch that struck Kentner on the night of Jan. 29, 2017.

Crown prosecutors Andrew Sadler and Trevor Jukes argued that the injuries Kentner suffered as a result of being struck resulted in her dying five months later in July.

The Crown’s case relied primarily on testimony of forensic pathologist Toby Rose, who said the blunt force trauma of being struck by the trailer hitch, along with emergency surgery, shortened Kentner's life.

“The force of the impact ruptured Ms. Kentner’s small bowel. Unfortunately, she had pre-existing health conditions that complicated her injury,” Justice Pierce said. “The forensic pathologist testified the injury hastened her death.”

During a sentencing submissions hearing held in February, the Crown called for a sentence of eight to 12 years, while Bushby’s attorney’s George Joseph and Ryan Green argued for a four-year sentence given Bushby's age and that he was a first time offender.

“Ms. Kentner was much loved and much missed,” Justice Pierce said. “Her sister Cheryl described her sister as the light in the darkness, someone they could count on. Her family miss the joy she brought to their lives.”

Justice Pierce also spoke at length about the victim impact statements presented by the Indigenous community, detailing the violence experienced by Indigenous people in the city of Thunder Bay.

“Ms. Kentner, an Indigenous woman, was victimized when she walked peacefully on a city street,” she said. “Understandably, her loss is keenly felt in the Indigenous community.”

Despite the impact Kentner’s death has had on the Indigenous community, Justice Pierce said it does not translate to a higher penalty because Bushby was not charged with a hate crime and she must impose a sentence based on the evidence and the charges brought before the court.

“The Crown conceded that it cannot prove beyond a reasonable doubt that Mr. Bushby was motivated by bias toward indigenous people when he attacked Ms. Kentner,” she said.

However, Justice Pierce did say Bushby demonstrated bias toward women and concluded “his plan gained momentum when he had a weapon to throw. Then he spotted women to target and acted on his plan.”

Justice Pierce also spoke to Bushby’s pre-sentence report, which detailed that he had a stable upbringing. She also referred to Bushby’s apology before the court following his guilty verdict.

“During his pre-sentence report interview he expressed remorse for his actions,” she said. “He stated: ‘I wish I could take it back and that things were different. I’m sorry they have to grow up without a mother or sister. I see how it has made a big impact on their lives as well as mine.’”

Previous cases cited in Justice Pierce's sentencing referenced what could be considered aggravated manslaughter where the accused were intoxicated during the time of the offence. Sentences in those cases were between 10 and 12 years.

“I agree with the Crown’s submissions that even though drunk, Mr. Bushby demonstrated a high degree of awareness that his actions would cause harm,” she said.

However, unlike the cited case law, Justice Pierce said: “the attack was not like cases involving multiple stab words or a savage beating.”

There were also several mitigating factors in Justice Pierce's ruling, which included Bushby's age at the time of the offence, being a first-time offender, and the strong possibility for his rehabilitation.

The aggravating factors included Bushby's high moral culpability and the knowledge that his actions could cause serious harm. Kentner was also an unsuspecting victim who was not able to defend herself from the attack and Bushby's actions showed a bias toward women.

"With your trailer hitch, you targeted a vulnerable woman on the street when she could not protect herself," Justice Pierce wrote. "You did it from the safety of a vehicle so you could just drive way. She was a stranger to you. You did not have to look her in the eye, or find out who she was. You dodged the risk that she or her sister could pick up that trailer hitch and throw it back at you."

At the conclusion of her sentencing, Justice Pierce spoke to the impact Bushby's actions have had on the broader Indigenous community, not just in Thunder Bay, but across Canada.

"The ripples from your actions continue beyond the city," she said. "Your actions have signaled to Indigenous people that they cannot expect to be safe and that their lives are not valued. That is what happened when you threw that trailer hitch."

The case has taken many turns since charges were first laid against Bushby in 2017. First charged with aggravated assault, following Kentner’s death, the Thunder Bay Police Service in consultation with the Crown and regional coroner’s office, upgraded the charge to second-degree murder.

The trial was initially scheduled to take place in January 2020 but was delayed to wait for the Ontario Court of Appeal to deliver a decision in January concerning the law as it pertains to jury selection.

A second trial date scheduled for April 2020 was adjourned due to the COVID-19 pandemic. In September 2020, the Crown said it would no longer be proceeding on the charge of second-degree murder and filed a new indictment on the charge of manslaughter.

The trial was to be held in October but was delayed again until November and ultimately was held in December at the Thunder Bay Courthouse Hotel.

The sentencing too was delayed from May until June due to ongoing concerns surrounding the pandemic.

Bushby is also required to submit a DNA sample, has a 10-year weapons prohibition, and must not make contact with any members of the Kentner family while serving his sentence.