The city’s police force is attaching a warning to its 2014 budget presentation. The Thunder Bay Police Service Board’s proposed budget will feature an overall increase of 3.5 per cent.
Dec 17, 2013 12:57 PM By: TbNewsWatch.com Staff 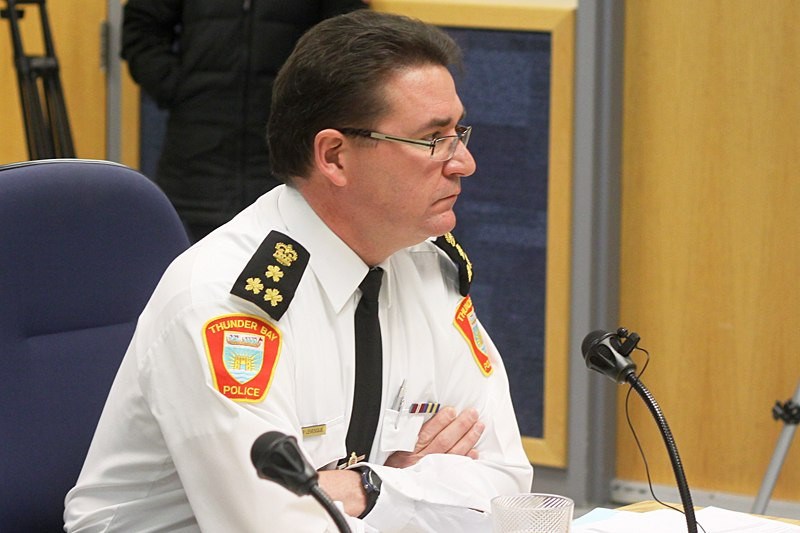 The city’s police force is attaching a warning to its 2014 budget presentation.

The Thunder Bay Police Service Board’s proposed budget will feature an overall increase of 3.5 per cent. The force’s police chief calls it a lean budget, but cautions that operating under it will leave no room for error.

“This is the second year in a row I’ve come to the board with no increases in material accounts at all,” Thunder Bay Police Service chief J.P. Levesque said during the scheduled police service’s board meeting Tuesday at the Balmoral Street station.  “That is somewhat dangerous. We could see anything, a change in gasoline prices, that could have a big effect on us.”

The proposed budget was approved by the board Tuesday. The increase of nearly 3.5 per cent brings the 2014 net budget up to just more than $36 million. Despite that amount, Levesque said the budget is cut nearly as much as possible without eliminating positions.

“At some point, we’re going to have to reconcile those material accounts. You try to budget based on history and experience but there’s a political side to this as well. You have to get the budget passed.”

He added that every effort was made not to let any potential cuts have an impact upon front line service, but acknowledged that some planned hiring may have to be delayed.

Board chair Joe Virdiramo said he supports the work done by Levesque and administration in preparing the budget, and said he is optimistic it will be passed by city council.

“At these times, 3.5 per cent is a good budget for us to bring forward,” said  Virdiramo, who is also the Westfort ward councillor. “We have to provide the service and keep the city safe and this how we do it.”

The operating budget will see an increase of $1.2 million, with the majority of that increase due to a negotiated 3.1 per cent wage increase.

The most significant cost associated with the capital budget increase comes from the mandated Next Generation 911 service, which is projected to take up nearly a quarter of the capital. This will lead to police being able to be contacted in emergency situations via text messaging.

The onus falls on the police to fund the equipment and system required for the service.

One area that Levesque is going to be looking for assistance is with funding for some expenses that are mandated.

As part of the Municipal Act, city police are responsible for providing security in the courthouse. With the new consolidated courthouse slated to open early in the new year, there is a shortfall between the cost the police service incurs and what funding is received.

Levesque said the service is looking to renegotiate the agreement with the Ministry of the Attorney General to bridge the gap for the 2015 budget, but acknowledged it wouldn’t make a difference for the coming year.

“The $522,000 we’re receiving for court security doesn’t even pay half,” Levesque said.

“We’re looking at $1.2 million to cover security in a provincial building. In 2009 when they gave us funding to start offsetting that cost, that was based off numbers we gave them in 2008.”

Levesque is scheduled to present the budget to city council in February.