THUNDER BAY – The mayor, who recently declared to council that he didn’t like watching flowers grow, took time on Thursday to smell the roses.
Sep 20, 2012 1:28 PM By: Jeff Labine 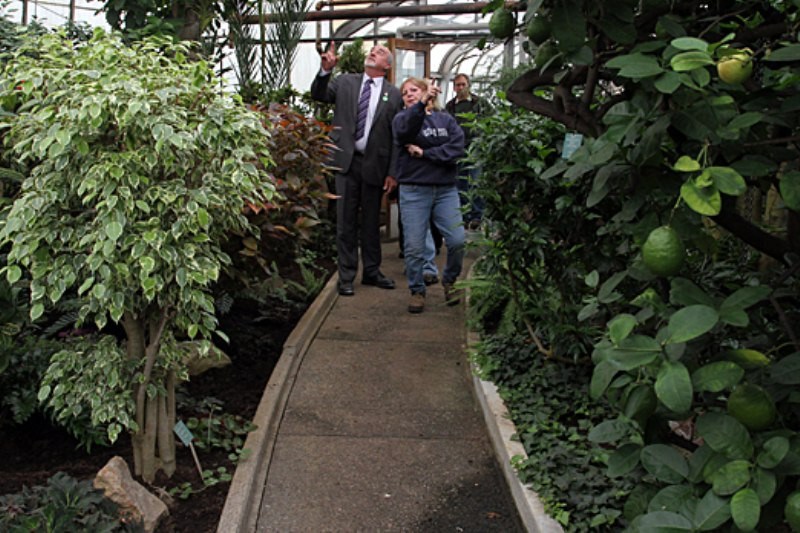 THUNDER BAY – The mayor, who recently declared to council that he didn’t like watching flowers grow, took time on Thursday to smell the roses.

Allergies kept Keith Hobbs out of the Centennial Botanical Conservatory, but after paying his first visit Thursday the mayor has had a change of heart about the facility’s closure.

The city closed the conservatory after reports came in that glass had fallen from the roof. Administrations recommended the city re-open the tropical display house to the public after install a $76,000, but keep the east and west wings closed.

Hobbs had walked in wearing a hardhat but was told he didn’t need it since the inspector had come earlier in the morning to ensure the building was safe.

Having toured the facility and seeing firsthand the supposed dangerous conditions, Hobbs said he’s changed his mind and will support keeping the conservatory open.

“I guess I should have come here as a child,” Hobbs said. “When staff tells me glass falls out not in, I’m concerned about all this hype on safety. I’m glad I voted against the $76,000 for the netting. I feel very safe in here.

Some councillors have argued the conservatory would be better suited at Prince Arthur’s Landing instead of being located off Dease Street. Hobbs said it’s not possible to have the conservatory there because of soil issues and drainage into Lake Superior.

“We have to figure out ways to make revenues on this,” he said.

Hobbs added he also learned the marketing budget for the Conservatory is $52 a year.

Karen Nadeau has worked at the conservatory for the past 24 years and said there’s never been any falling glass that has come into the facility.

There were a few panes of glass that appeared to have started to slide off or cracked and one was broken completely.

Nadeau said sometimes with the heat the glazing that holds the panes together will slide down but on the outside. If it was winter, a worker would have had those windows repaired by now in order to keep the heat in, she said.

“You look at any greenhouse and they are all built the same way,” Nadeau said. “The way the panes are overlapped if they do slide, they are going to slide down. Never had we had glass fall in. I think that’s false like the sky is falling.”

Nadeau called the net a waste of money because the facility was safe and it would cast shadows on the plants.

Besides the falling glass, there have been other myths circulating such as the greenhouse turning up to the heat to melt off snow. Nadeau said that’s simply not true because they have fans that circulate the heat, which helps melt the snow off.

There’s no switch to turn up the heat, she said.

So far, only Hobbs has paid a visit to the conservatory but Nadeau said she’s been trying to get other councillors to come so they can have the same change of mind.

“I think they are short of money for the waterfront,” she said. “They have spent a lot of money up there and they are out of money. We have prime land and it was made for the conservatory. If they want a new one, build over if not just repair it.”

She added the last time the conservatory received major renovations was back in 2000 with only a few touch ups in 2005.