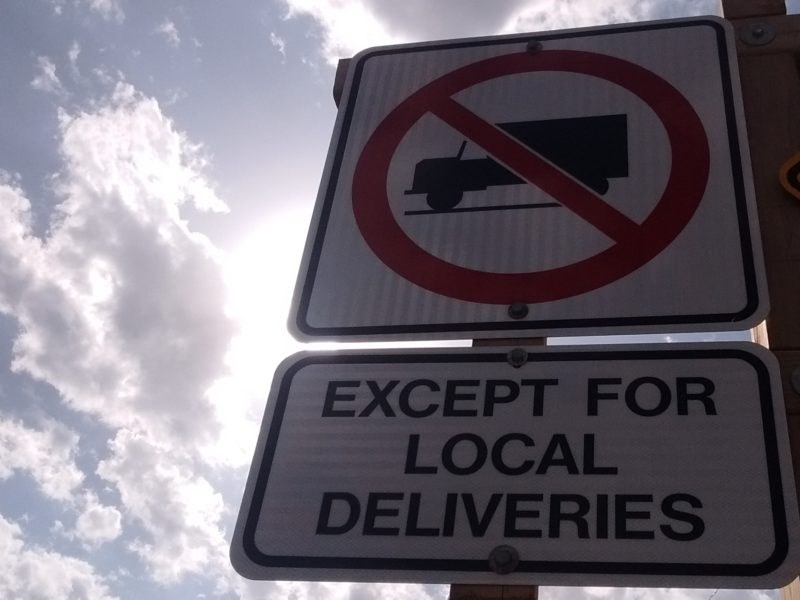 THUNDER BAY – A Thunder Bay city councillor says the use of a local mall as an unofficial rest stop by long-haul truckers has gotten out of hand.

Coun. Albert Aiello raised the potential for new weight restrictions on East Avenue as a way to keep trucks from accessing the County Fair mall at a council meeting on Monday

The McIntyre Ward councillor successfully moved for a report from city administration on the possibility by December, saying he’d received numerous complaints from residents whose homes back onto the mall, which includes a Walmart and No Frills grocery store.

“The big issue is the number of transports that are parked there overnight, making it fairly uncomfortable to be living there,” he said. “You can’t open windows, you can’t sit outside – just the noise and the smell of diesel fuel throughout the night.”

It’s not uncommon to see 15 to 20 transports parked behind the mall, Aiello said. A resident had been told by one driver that the location was programmed into his GPS as a stop, he noted.

“This is pretty much a no-brainer,” he said. “The County Fair plaza isn’t a truck stop… it’s a place where the community gets their groceries.”

“I would challenge anyone to come sit there with one of the residents on East Avenue or County Boulevard, and listen to the trucks go from 8 or 9 o’clock on.”

A weight restriction on East Avenue would include an exemption for trucks to access the mall for legitimate purposes such as deliveries.

Trucks are essentially unable to access the mall from the main customer entrance off of Dawson Road, which includes two tight turns, Aiello said.

Manager of licensing and enforcement Doug Vincent said the city would examine options to curtail the use of the mall by trucks, including a bylaw introducing weight restrictions on East Avenue and heightened parking violation fines in the area.

The bylaw could include penalties for violating the weight restrictions that result in demerit points for both truck drivers and companies, which he said could impact their licence to operate and serve as a significant deterrent.

The city could also boost fines for parking violations by truckers at the mall from $35 to a range of $500 to $700, Vincent said, and empower mall security staff to write parking tickets under a bylaw.

“Because it’s private property, it really does fall on the mall owners to do enforcement and pay for the enforcement, which hasn’t been successful to date,” said Aiello.

Developer Goldmanco Inc., which owns the County Fair property, did not respond to a request for comment Wednesday.

City councillors questioned whether the weight restriction would be effective Monday, and if other solutions could more fully address the root of the problem.

Coun. Brian Hamilton worried the restriction could simply push truckers to other nearby locations in the city, resulting in similar problems.

Director of engineering and operations Kayla Dixon said the city would encourage truckers to move to alternatives including scales just west of the city on Dawson Road, or the Flying J truck stop east of Thunder Bay.

Coun. Cody Fraser lamented council’s failure last year to pass the Designated Truck Route, which would have forced heavy trucks off Dawson Road and onto Highway 11/17.

The problem at County Fair is just one of the repercussions of that failure, he said.

Coun. Rebecca Johnson suggested a truck stop in the city could provide an outlet for truckers looking for somewhere to stay.

“The drivers are mandated to take rest periods, and Thunder Bay is one of the places they have to have a rest period,” she said. “Why are we not… going out to the community at large and saying, why can’t we get a truck stop here? It would alleviate this whole situation.”

Giertuga, however, suggested there was little need, with the Flying J less than 50 kilometres to the east.

Council voted overwhelmingly to receive a report on potential weight restrictions on East Avenue, and greater enforcement options, with only Hamilton voting against.


Have you spotted breaking news? Police, fire, and other stories of interest in our community? Then we want to hear from you. If we use your photo or your tip leads to a story being published on our site, you'll be entered into a draw for a monthly prize. Send us your photos and your news tip to photos@dougallmedia.com and win!