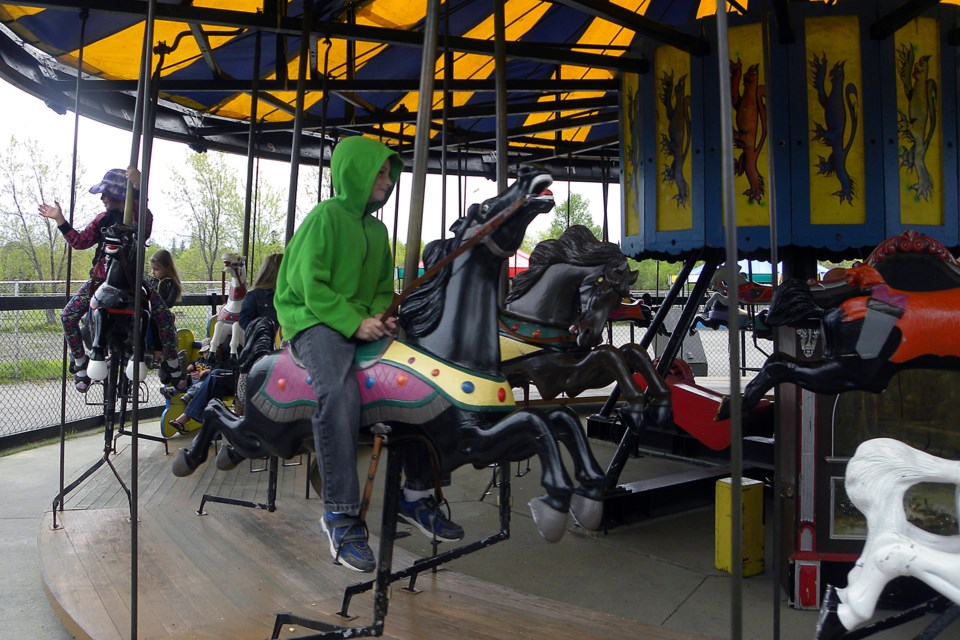 A vote on funding for a building to enclose the Chippewa Park carousel exposed uncertainty over the park's future at city council. (File photo)

THUNDER BAY – Uncertainty over the future of Chippewa Park has Thunder Bay’s city council divided on whether to continue investing in the attraction.

Council narrowly approved committing $300,000 of city funds toward a proposed building to enclose the park’s soon-to-be-restored carousel on Monday night.

The decision came on a 7-5 vote, with several councillors expressing concerns over unresolved claims to the park by Fort William First Nation and a perception of declining public interest in the park.

Coun. Brian Hamilton, who is on a leave of absence and missed Monday’s vote, has also previously expressed his opposition to further development at the park.

The city’s financial commitment is conditional on the success of the Friends of Chippewa Park group in securing another $1.3 million in funding from provincial and federal programs to cover the project’s estimated $1.6 million total cost.

Proponents argued that would represent an impressive return on the city’s investment.

“The funding will come from the Renew Thunder Bay [fund], which we set up to leverage dollars,” said Coun. Andrew Foulds. “To spend $300,000 and get $1.3 million in return? That’s pretty good leveraging.”

In addition to its funding commitment, the city agreed to partner with the non-profit Friends group, which supports the park through fundraising and other means, on an $800,000 application to the Northern Ontario Heritage Fund Corporation (NOHFC).

It will also lend its support to a $500,000 application to Heritage Canada.

Parks manager Cory Halvorse has said the building would protect the city’s investment in the more than century-old carousel, avoiding wear from exposure to the elements and having to be disassembled each winter for storage.

The building, which is intended to leave the carousel visible from the outside, could also house a small woodworking space, gift shop, and interpretive features, the Friends group has suggested.

While councillors praised volunteers with the group for their work, several expressed their desire to see the city divest from Chippewa Park, or at least seriously consider the possibility.

After asking whether Fort William First Nation had an outstanding land claim on the park – something city manager Norm Gale said he couldn’t comment on – Coun. Shelby Ch’ng urged her colleagues to consider the city's relationship with its neighbour before moving forward.

“I’m not really comfortable building something [at Chippewa] without consultation with Fort William First Nation,” she said.

A city report stated the First Nation had not originally been consulted on the plans for the building. The city reached out to share details after concerns were raised on the issue at council on Nov. 2.

“From an Indigenous relations perspective, a project as substantial as the proposed carousel building would have ideally been communicated to Fort William First Nation at the outset of idea generation, so they could be informed and have a chance to provide input,” the report stated. “Moreover, FWFN representatives have expressed interest in the park lands and exploring collaborative opportunities attached to Chippewa Park.”

FWFN Chief Peter Collins told Tbnewswatch earlier this month the community had never relinquished its claim to the park property.

"It's an outstanding issue we'd love to settle with the city,” he said. "You talk about reconciliation, well, that would be a good opportunity to reconcile."

Mayor Bill Mauro stated his belief the city would eventually relocate the carousel, but said some of the factors behind the decision weren’t appropriate to discuss publicly.

“I believe we’ll see that asset relocated at some point, I don’t know when,” he said.

Coun. Mark Bentz, meanwhile, suggested the city might want to relocate the carousel simply because Chippewa Park no longer seemed to draw as much interest from the public.

“I’m wondering, is that the location?” he asked. “I know that the Friends of Chippewa Park want to invigorate [it], but when I go out there, the place is quite empty. Are we deploying the asset where it’s going to provide the best enjoyment for the citizens, for our tourists, and the best return for the tax-payers that own it?”

Coun. Aldo Ruberto asked to confirm that the plan involved a moveable structure, given the uncertainty of the park’s future.

“I do get a little nervous about investing money [there],” he said. “If something were to happen and we want to move that carousel – I don’t mind supporting it, but I want to support it knowing it’s mobile, just in case.”

Halvorsen confirmed plans to pursue designs for a building that could be relocated. It would almost certainly take several years before the carousel would be moved, he added, even if council decided to tackle the issue immediately, given the need to study how it would safely be moved, and find an appropriate new location.

Coun. Rebecca Johnson moved to divide the vote on the proposal, believing the city should support the funding applications, but not kick in $300,000 of city dollars.

Council voted to lend its support to the applications on an 8-4 vote, with councillors Ch’ng, Fraser, Giertuga, and McKinnon voting against.

Council voted 7-5 to allocate $300,000 for the project, with Johnson joining those opposed to the previous motion.