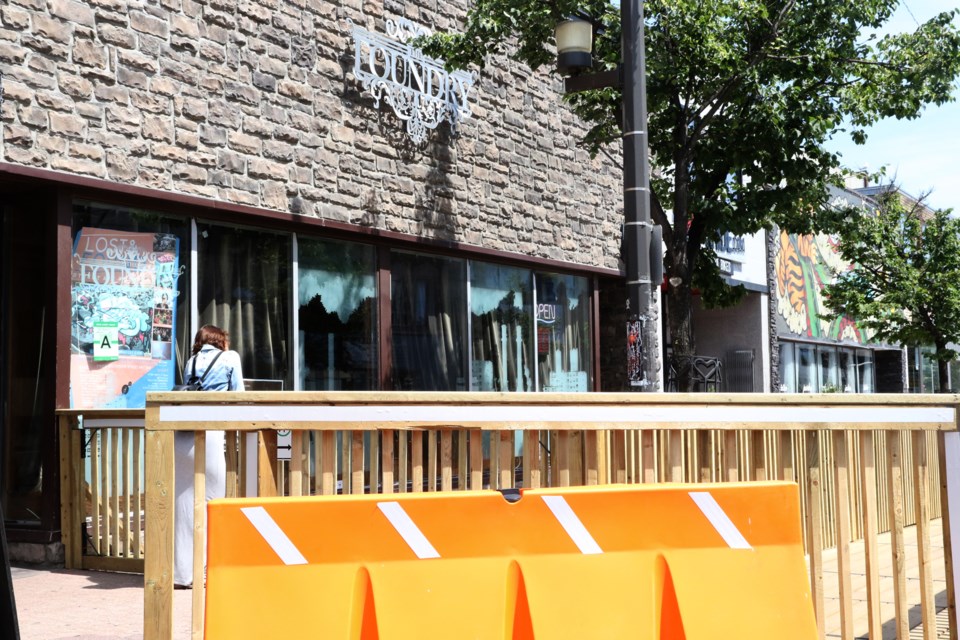 The Foundry was the only participant in the city's pop-up patio program in 2019. The city is looking to change that with new measures. (File photo)

THUNDER BAY – The City of Thunder Bay is looking to support recovery for local restaurants and bars by making it easier to install temporary seasonal patios.

The city’s pop-up patio program has seen little uptake in previous years, but city and business leaders hope to change that eliminating many fees and considering bolder options like street and parking lot closures.

Mayor Bill Mauro says the city needs to do everything it can to support local business recovery. He brought forward a motion to pursue expanding the program at a May 25 meeting, saying outdoor dining options would help draw back customers who may be uneasy about congregating indoors.

“I don’t think we’re going to see a return to the way business occurred before COVID-19, even once the province allows them to reopen,” he said. “I’m not sure customers will go back, and an outdoor patio might give people a higher level of comfort.”

Other councillors echoed the mayor’s concerns for the industry, fearing some local businesses may not survive the shutdown. The mayor’s motion passed unanimously, with a report on how to improve access to the program coming back to council on June 15.

Mauro acknowledged the pop-up patio pilot program, launched in 2018, has previously struggled. In 2019, only one business – The Foundry, a pub on Red River Road – ended up participating.

For Foundry owner Dane Newbold, the program offered a welcome boost to his business.

“It’s a great draw to the restaurant,” he said. “We saw a real spike in overall traffic the first year, and in the second year we saw an increase as well.”

“[It’s] like an open sign. When you see a patio set up, it takes all the questions out of the equation. You see it and you know, that’s a bar and they’re serving right now.”

The initial process of setting up the patio brought its share of frustrations, however. An expansion to the pub’s AGCO liquor license cost about $1,000 and took about four weeks to approve, delaying the opening of the patio. Approvals for the patio were required from an architect, an engineer, and city planning to ensure accessibility and building code compliance.

The second year of participation, with planning and approvals already completed, was far easier, said Newbold.

The program also carries a one-time application fee of $300, fees to rent city space, and tax implications by expanding restaurants’ footprint. Debating the motion, Coun. Brian McKinnon said one business owner he spoke with would have seen a $2,300 annual increase to participate. He wanted to see those kinds of barriers cleared where possible, especially during COVID-19 recovery.

“The city definitely didn’t make anything easy when this process started,” Newbold reflected. “The idea that they’re now making it easier, that they’re going to expand the ability of people to become involved, is a really positive thing.”

Several city councillors expressed frustration at the lack of a vibrant outdoor dining tradition in Thunder Bay, blaming “red tape” and an overemphasis on regulations. McKinnon said the experience of one business owner with whom he had spoken was representative of an inflexible system.

“One was going to go ahead, but they were going to need six inches more of space and planning at that time said no,” he said.

Coun. Aldo Ruberto pointed to other parts of the world where businesses seem more free to simply put out tables and chairs without so many regulatory constraints.

“If you travel in other countries, you see tables outside,” he said. “I think sometimes we make so many rules, with so much space needed because we’re in Canada and we’re used to a lot of space. But it seems to work in other countries. I think we should look at adapting some of those rules and maybe be a little more lenient.”

The city and the Waterfront District Business Improvement Area (BIA) both say it’s not quite that simple, largely due to the built environment of the city and accessibility requirements. The city’s mostly narrow sidewalks often don’t lend themselves to outdoor dining.

“In Thunder Bay, it’s very possible to apply to the city to have tables on the sidewalk,” said the city’s realty services manager, Joel DePeuter. “It’s just that in many cases, the sidewalks aren’t wide enough to accommodate the tables and also pedestrians.”

For that reason, the program has focused on installing temporary patios in storefront parking spaces, leaving the sidewalk clear. The Waterfront District BIA said that’s not always an appealing option.

“If the current infrastructure does not allow for the addition of tables without negatively impacting accessibility, it becomes costly and cumbersome for a business to construct a patio in limited parking spaces (should they exist),” the BIA said in a statement.

“When there is enough sidewalk, the square footage rental fees, and sometimes the building code requirements, become cumbersome for the short patio season.”

DePeuter understands the challenges, but said the city’s fees are in line with or lower than other municipalities.

“Frankly, there are issues of fairness if people aren’t required to pay rent for city space that they use,” he added.

This year, however, is considered a special case as bars and restaurants face unprecedented challenges. The BIA was pleased to see the city looking to waive fees this year. It’s also considering new alternatives like the possibility of street closures and allowing businesses to close private parking lots for use as outdoor dining spaces.

While it might be good for his business, Newbold was hesitant to endorse street closures, saying they might negatively impact retail stores in the area.

“When people talk about closing down Red River Road altogether, I think that’s a little misguided,” he said. “People want something like that, but they don’t want that. The restrictions it creates on traffic flow… a lot of businesses that do retail don’t like the idea of people having to walk to their store.”

He hoped the city would consider more permanent solutions to encourage outdoor dining.

“I think the better plan would be to look at a one-way street option downtown, with angled parking. That’s where you start getting the best of both worlds.”

Coun. Kristen Oliver suggested partial street closures should be limited to weekends, as is done in some other Ontario cities, to limit impacts to retail businesses.

If bars and restaurants are allowed to reopen this summer, Thunder Bay residents may see more patios than ever. The Waterfront District BIA said there was increased interest from its members, while Mauro said he’d spoken to numerous interested businesses.

A report evaluating the success of the city’s pop-up patio pilot program will come before city council later this year.