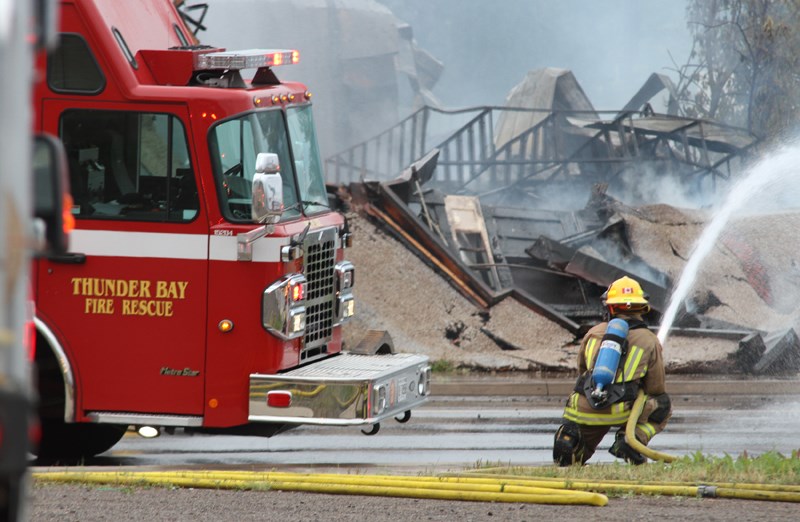 THUNDER BAY -- The City of Thunder Bay says a provincial arbitrator's Interest Arbitration ruling on a three-year collective agreement with the Thunder Bay Firefighters Association will add to the increasing costs of providing tax-supported emergency services to the public.

The city had asked the arbitration panel to approve annual increases of 1.75 per cent over each of the three years, in keeping with its contracts with other city employee groups.  Alternatively it asked to maintain the historical wage parity between firefighters and police.

The arbitration ruling noted the need to take into account the higher wages that firefighters are making in other Ontario cities.

A First Class firefighter in Thunder Bay will now earn $96,630 this year, which is $634 more than the police equivalent.

In a statement on Tuesday afternoon, the city said the award reinforces the need "to address this fiscal challenge on a community and Province-wide basis."

City Manager Norm Gale said "interest arbitration does not replicate free bargaining," adding that the city will continue to appeal to the province to reform the system.

Interest arbitration is a process by which issues not resolved in bargaining between an employer and a union are presented to an impartial arbitrator for a final decision.

The city's statement said that it is working with the Association of Municipalities of Ontario and other organizations to address issues related to province-wide arbitration processes and the financial impact on municipal emergency services.

The Thunder Bay Firefighters Association (TBFFA) had more to say Tuesday about the contract negotiating process than it did about the arbitration award itself.

Eric Nordlund, who chaired the TBFFA's bargaining team during contract negotiations with the city, declined to comment on the specifics of the award.

Asked by Tbnewswatch.com if he was satisfied with it, he replied "Not all of it. It is what it is. We have to take what's given to us now instead of having some control over what parts we might like, what parts we might now, what's important to the city."

Nordlund went much farther in discussing the length of time it has taken to finalize the collective agreement, describing it as "frustrating."

The arbitration award is for a contract that expires in just a few months.

Nordlund said trying to negotiate a contract with the city without going to arbitration seldom works. "We've negotiated two...ever. Why is it that we have such difficulty"?

He said other firefighter groups in Ontario have been able to negotiate collective agreements "that are in keeping with their peers, basically...But you know, it's the local politics of" Thunder Bay and the municipal council."

Nonetheless, Nordlund said he still believes it will be possible to reach the next deal without arbitration. "I know that firefighters aren't asking too much and I'm pretty confident the negotiating team on the other side has the ability to work with us to reach that. It's a question of mandate, I think, but I don't know."