Part of the campaign to bring the national women’s curling event to the city includes a website to gauge the interest from the public regarding tickets, volunteering, and sponsorship
Jun 17, 2019 7:54 PM By: Doug Diaczuk 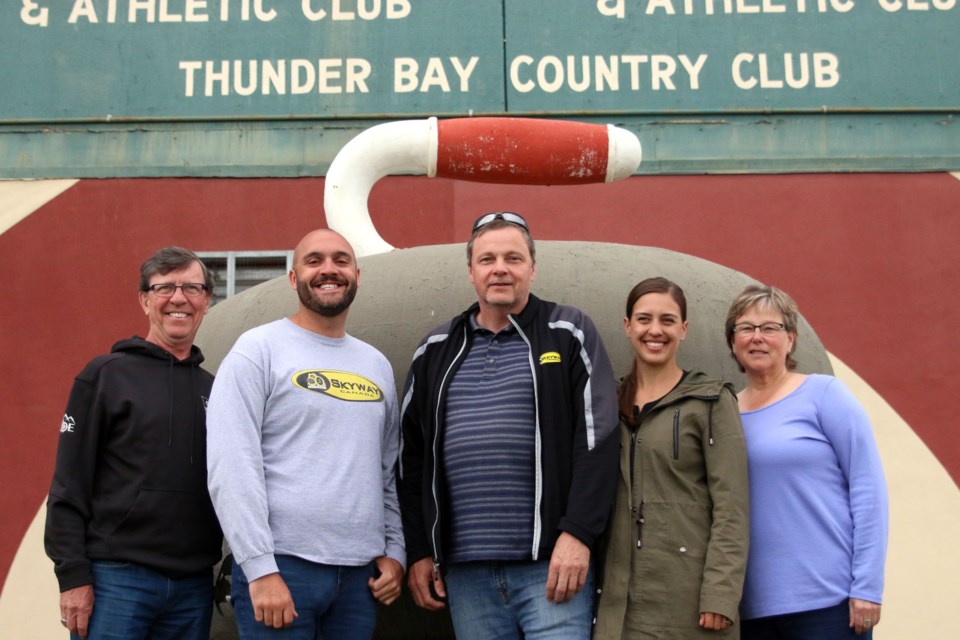 Rick Lang, chair of the Scotties Bid Thunder Bay 2021 Committee, Treveor Bonot and Kent Maarup with the Port Arthur Curling Club, curler Sarah Potts, and Diane Imrie with the Sports Hall of Fame are working to bring the Scotties Tournament of Hearts to Thunder Bay. (Photo by Doug Diaczuk - Tbnewswatch.com).

THUNDER BAY - It’s been 23 years since the city last hosted one of the largest curling tournaments in Canada and a local rink, who has made numerous appearances, is confident the fans that have cheered them on will help bring the Scotties Tournament of Hearts right next door to their home rink.

The curling community in the city is officially moving forward on its bid to bring the Scotties Tournament of Hearts to Thunder Bay in 2021. The committee behind the bid will be launching a media campaign on Tuesday and is encouraging curling fans and the general public to offer support.

The campaign will include the website GetTheScotties2021.ca where the public can express interest in becoming a volunteer, attending the event, or becoming a sponsor.

“It’s really to show Curling Canada as part of our bid that Thunder Bay is serious about this and we have the support in the community that will make it a great event,” said Scotties Bid Thunder Bay 2021 co-chair, Rick Lang.

The bid is due by June 30, so there is a small window for people to jump on board, but Lang believes the city has already shown it can get behind major curling events.

“When we had the Pinty’s Grand Slam here, we had 250 volunteers sign up in a matter of two weeks and we sold our 900 tickets to that event within two weeks of making them available,” he said. “I am really confident we would have a huge response in Thunder Bay. It would be the biggest show in town.”

Thunder Bay hosted what was then known as the Scott Tournament of Hearts in 1996, which was won by Team Ontario led by Marilyn Bodogh. The event was held at the Fort William Gardens and if the bid is successful, it will return to the downtown Fort William arena.

Bid committee members are hoping to attract more than 70,000 spectators over the week and possibly have an economic impact of between $7 and $10 million.

“I believe it is probably the biggest sporting event we could have here in Thunder Bay in terms of 60 hours of TSN coverage and huge national media coverage, fan interest,” Lang said. “It’s really a big show and a big event.”

Potts believes curling fans in the city will get behind bringing the Scotties Tournament of Hearts here and while having it on home ice would be exciting for her and the other members of Team McCarville, it might also mean some added pressure.

“Everyone assumes you’re there and you have to win your way there,” she said. “It all comes down to a provincial final, which is one game and you just never know how it’s going to go. We would probably want it that much more. But pressure is not always a bad thing as long as you use it to fuel you in the right direction, so I think it could be good as well.”

The public can provide feedback on the GetTheScotties2021 website until June 27.