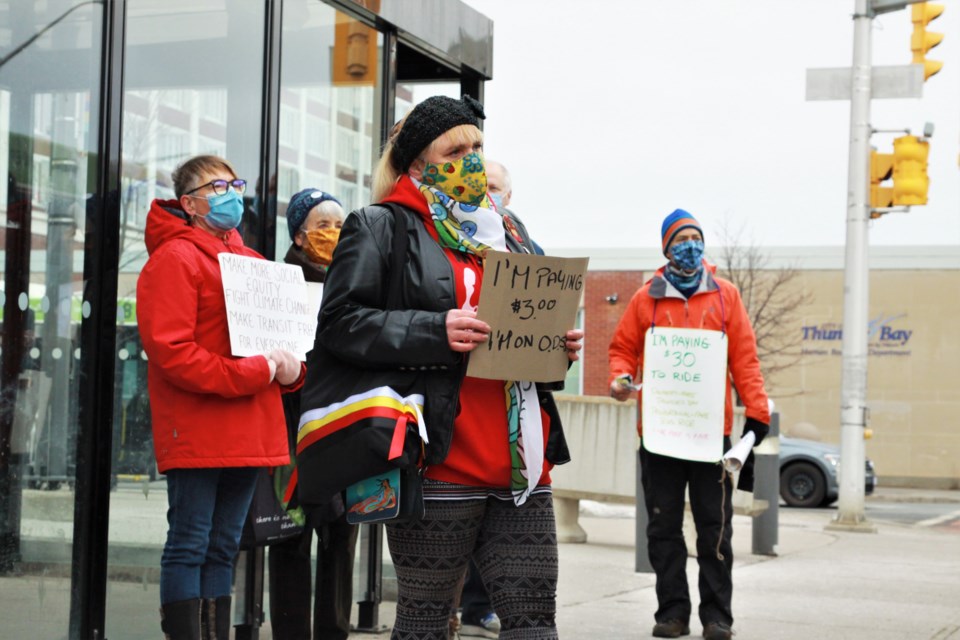 Poverty Free Thunder Bay urged city council to prepare for bold moves like free transit, which it promoted with a "proportional fare ride" in November. (Photos by Ian Kaufman, tbnewswatch.com)

Council tentatively passed the budget on Tuesday, approving a tax levy increase of 1.83 per cent (1.6 per cent after growth) without major service reductions. It's the lowest levy hike in a decade, with councillors heeding public calls to spare residents and businesses additional financial strain during the pandemic.

Thursday’s meeting was a chance for the public to weigh in on the budget before a final ratification vote on Monday, when councillors can put forward last-minute changes.

Poverty Free Thunder Bay had asked councillors before the budget review to make public transit free to ride by 2023, slashing fares by a dollar a year starting in 2021.

Councillors weren't ready for that admittedly bold proposal (no other Canadian city has gone fare free), leaving cash fare at $3 and turning down a requested monthly fare-free day, largely over concerns it could cause crowding during an ongoing pandemic.

They did, however, vote to freeze transit fees, cancelling minor increases to transit passes. They also previously directed Thunder Bay Transit to return with a report on the implications of going fare free.

On Thursday, Berger said the group understood the reluctance to make bold moves during a public health crisis, and thanked councillors for taking the issue seriously.

“It makes sense to start slowly, and to do it right,” he said.

However, he stressed there was urgency to build a better transit system to confront dual crises of poverty and climate change.

The city should be looking to make large investments to increase service frequency, the only way it could convert drivers, Berger suggested.

“Keeping in mind we’re deep in a climate emergency, I think we have a moral obligation to provide excellent public transit, and to do more to get people out of cars.”

The city normally collects roughly $7 million a year in fares, covering about one third of the transit budget.

Coun. Albert Aiello said the boost was part of a crucial plan to tackle the city's looming infrastructure gap, estimated at over $20 million a year.

“Are you opposed to us spending money on capital, fixing streets?" asked Coun. Albert Aiello. "We’re trying to get more done around the city, as far as infrastructure goes.”

Wojak also renewed his call for a review of the Thunder Bay Police Service, pointing out city police funding had grown by $6 million since the current council took office in 2018, accounting for nearly half of the total increase to the tax levy in that time.

Coun. Aldo Ruberto was ruled out of order during the question period following the deputation by Coun. Mark Bentz, who chaired the meeting.

Ruberto responded several times with his own comments countering Wojak's framing of the issue, despite repeated reminders from Bentz that only questions were allowed at the deputation meeting.

Councillors also received a written deputation from the Friends of the Thunder Bay Conservatory.

The group, which has long called for investment into the neglected attraction, thanked councillors for allocating nearly $2 million in the 2021 capital budget for replacement of the production greenhouses next door.

A new, larger greenhouse can generate savings of over $150,000 a year, staff estimated, while the existing structures had deteriorated to the point of being unsafe.

"While the [city] is experiencing truly challenging economic times, administration has demonstrated that funding for replacement of the production greenhouses is necessary and fiscally responsible," the Friends group wrote.

The greenhouse investment is expected to set the stage for renewal of the conservatory itself, estimated to cost another $2.6 to $3.1 million. That would allow the reopening of the side wings, along with other improvements and energy savings.

The lack of many major criticisms of the budget Thursday was consistent with generally positive feedback councillors said they were receiving.

While some of her constituents would have preferred no tax hike at all, Coun. Kristen Oliver said most she'd heard from were satisfied.

“The comments I’m seeing, people see it as a respectful budget," she said.

Coun. Andrew Foulds agreed, saying if there was concern in the community, it’s less about 2021 and more about the future.

Residents are concerned over how the city will pay for major potential infrastructure projects like a new police station, the indoor turf facility, and the redevelopment of the Victoriaville Centre area, he said.

City council will vote to ratify the 2021 budget on Monday.