More than a dozen MNRF crews fighting fires northeast of Nipigon, with fire hazard low to moderate in most of region.
Jun 13, 2021 10:35 AM By: TbNewsWatch.com Staff 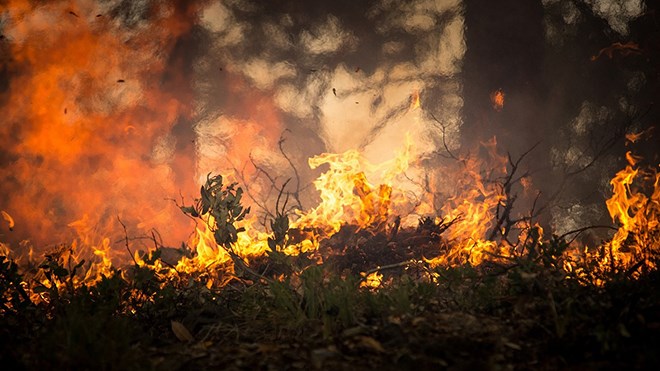 Over a dozen crews are assigned to fight a pair of Nipigon-area forest fires, with more on the way. (File)

Fire crews are mounting a significant response to a pair of forest fires located near Nipigon, while fire hazard was mainly low to moderate elsewhere across Northwestern Ontario, with only one new fire reported over Friday and Saturday.

Ontario’s Ministry of Natural Resources and Forestry (MNRF) was tracking 34 confirmed forest fires in its Northwest region as of Saturday evening.

Five MNRF fire crews and four helicopters had been assigned to fight Nipigon 7, a 2,410 hectare fire located about 45 kilometres northeast of the town of Nipigon. The fire considered not under control Saturday, with more crews expected to be deployed over the next few days.

Nearby Nipigon 8, about 40 kilometres northeast of Nipigon, was listed as being held at 150 hectares. Nine fire crews and two helicopters were assigned to fight the fire.

Both fires started on June 7, according to the MNRF.

The fires have prompted an implementation order from the ministry, restricting access to the following areas unless authorized by a travel permit from the Nipigon District MNRF: All roads north of the Camp 81 Road/Devious Lake junction, and west of the Camp 81 Road/John Ahl Road/Hainsworth Road junction; including Weatherall Lake Road, Cosgrave Lake Road, Seahorse Lake Road and Foam Lake Road.

A map outlining the restrictions is available online.

The ministry’s Aviation, Forest Fire and Emergency Services was tracking a total of 34 active fires across the Northwest as of Saturday evening. Of those, 7 were listed as not under control, 12 as being observed, 4 as being held, and 11 as under control.

The wildland fire hazard was mainly low to moderate across the region, with pockets of high hazard east of Lake Nipigon, and in the Fort Frances district.

Residents can find up-to-date information on the fire hazard and forest fires in their area using the MNRF interactive fire map.

Other fires of note in the region included Thunder Bay 33, located about 141 kilometres north of Thunder Bay in the Holinshead Lake area. The fire was being held at 216.7 hectares Saturday.

Thunder Bay 36, about 30 kilometres southwest of Upsala near Bedivere Lake, was listed as not under control at 500 hectares.

Crews and heavy equipment were making “great progress” on both fires, the MNRF reported.