Kenora, Sioux Lookout among other recipients of over $10 million in new recreation infrastructure spending.
Mar 19, 2021 7:23 PM By: Ian Kaufman 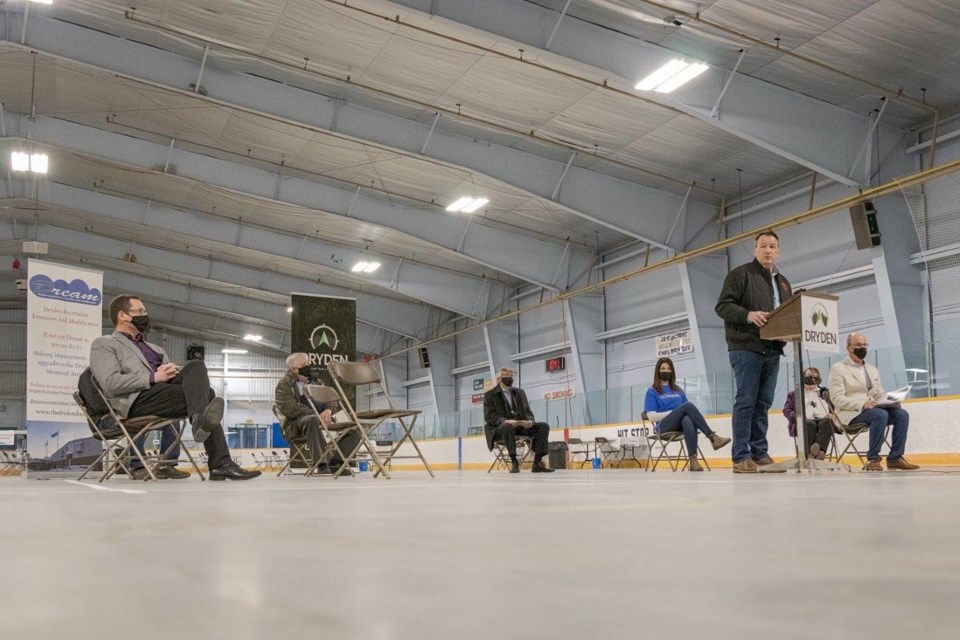 MPP Greg Rickford announces funding for the Dryden Recreational Centre and other projects on Friday. (Photo courtesy City of Dryden)

DRYDEN, Ont. – Joint investments from all three levels of government will see over $10 million spent to improve recreational facilities in several northwestern communities.

The bulk of that total – over $9 million – will go to major projects in Dryden and Neskantaga First Nation, with other recipients including Kenora, Ear Falls, and Sioux Lookout.

In all, Infrastructure Canada put forward roughly $5.2 million, the province $3 million, and funding recipients around $2.1 million to support seven projects in six communities.

“Coming out of COVID, it seems like all economists agree that to stimulate the economy and get [it] back on track, we should be spending money,” said Thunder Bay–Rainy River MP Marcus Powlowski at a virtual funding announcement Friday.

While infrastructure spending may tend to conjure visions of road and bridge work, Powlowski said investments in what the government calls “community and social infrastructure” like recreation centres was just as important.

That will include the addition of a new multi-purpose space with washrooms and an elevator, and four fully accessible change rooms. Some of the upgrades have been sought for a decade in response to user needs, said Kenora–Rainy River MPP Greg Rickford.

“It isn’t just about a couple of extra dressing rooms, it’s about a vision we had way back when girls hockey was on the rise, that they would have a place [for] girls change rooms,” he said, speaking from the recreation centre.

The pool roofing membrane will also be replaced, while the installation of a combined heat and power station will allow the facility to generate its own heat and electricity, saving on operational costs, according to Rickford.

Dryden’s Go-Getter Senior Activity Centre will also see a new injection of funds for a 2,500 square foot addition that will include office space, a stage with storage, meeting rooms, a kitchenette, an accessible washroom, and solar panels.

The Centre’s existing kitchen will also be renovated to include senior friendly cabinetry and appliances.

Neskantaga First Nation will see a $3 million renovation of the arena at its community recreation centre. That will see insulation and change rooms added, and an expansion to create an accessible gym.

In Kenora, the Central Community Club Recreation Facility will see the boards surrounding the hockey rink replaced, paving and lining of the ice surface, construction of a players’ bench area, and upgrades to exterior lights.

The rehabilitation of the Ear Falls recreation centre will make washrooms more accessible and add a chair lift connecting first and second floors.

Improvements to the dock at Vermilion Bay in the municipality of Machin, meanwhile, are expected to improve community access and cost $220,000. The work will address drainage and erosion issues, level the area leading to the waterfront at Eagle Lake, and repave the road and parking area.

Lastly, in Sioux Lookout, the Cedar Bay Community Stable will see about $78,000 worth of upgrades to extend electricity to the pavilion where community events occur, build new accessible washrooms, and purchasing a new tractor.

The facility is part of the Cedar Bay Outdoor Recreation Complex, a municipally-owned facility located along the shores of Pelican Lake.